The long arms of the world’s tallest man saved two dolphins in northeast China by reaching inside of them to remove plastic they had swallowed, state media reported Thursday.
The dolphins at an aquarium in Fushun, Liaoning Province, had fallen sick after swallowing the plastic from the edge of their pool, and attempts to use surgical instruments to remove the plastic failed because of the contraction of the dolphins’ stomachs in response to the instruments, the China Daily newspaper reported.
Veterinarians than decided to ask for help from Bao Xishun, a 2.36-meter-tall (7-foot 8.95-inch) herdsman from Inner Mongolia.
Bao, 54, was confirmed last year by the Guinness Book of World Records as the world’s tallest living man.
The official Xinhua news agency said Bao, using his arm length of 1.06 meters (41.7 inches), was able to reach deep enough into the dolphins to pull out the plastic.
Photographs showed the jaws of one of the dolphins being held back by towels so Bao could reach inside the animal without being bitten.
"Some very small plastic pieces are still left in the dolphins’ stomachs," Zhu Xiaoling, a local doctor, told Xinhua. "However the dolphins will be able to digest these and are expected to recover soon."
Chen Lujun, the manager of aquarium called the Royal Jidi Ocean World, confirmed the report to The Associated Press.
"When we failed to get the objects out we sought the help of Bao Xishun from Inner Mongolia and he did it successfully yesterday. The two dolphins are in very good condition now." 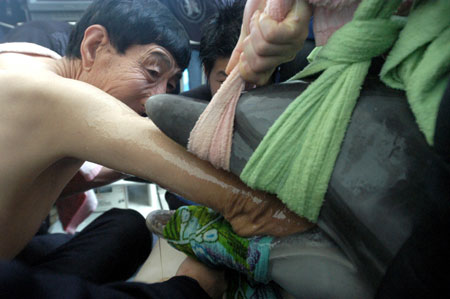 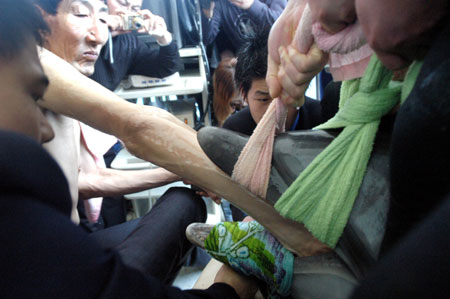 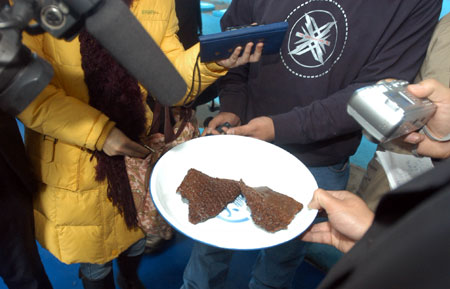 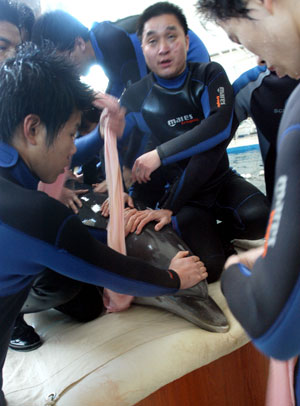 Employees fixes a dophin on a table at an oceanarium in Fushun.