A farmer who agreed to grow genetically modified potatoes for a scientific trial has withdrawn because he fears for his safety.

The government was planning two trials of a GM variety that should be resistant to potato blight.
One trial was to be held in Cambridge and the other at a farm in Derbyshire.
But the Derbyshire farmer pulled out after receiving anonymous phone calls. He feared for his family’s safety and was worried about potential protests. 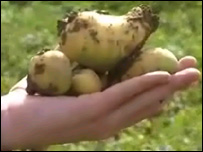 The potatoes were engineered to be resistant to blight

The GM potatoes, which were engineered by German chemical company BASF, were due to be planted next spring. The farmer’s decision has been welcomed by the organic lobby.

However, many scientists are angry and have criticised what they deem to be intimidation.
They say threats should not be allowed to undermine research.