One in four house-hunters are put off buying a home because of the neighbour’s garish Christmas decorations, according to a survey. (w/pics)

The research by Clydesdale Bank found one in seven Scots would decorate the outside of their homes this year.
But of the 1,000 people asked, about one in three said they would not want to live next door to someone who covers their property with decorations.
About half said they would like to see some form of festive display.
The study found that the chances of selling a house over the festive period could be reduced due to festive decorations.
However, 19% said houses adorned in Christmas lights and glowing Santas showed that the neighbourhood was a friendly one.
Steve Reid, retail banking director for Clydesdale Bank, said: "Plenty of people enjoy getting into the festive spirit with a few decorations here and there – but they should be wary about going overboard.
"A giant glowing Santa sitting on your chimney could see your neighbour’s chance of a house sale go up in smoke."
Earlier this year Vic Moszczynski, 50, of Sonning, Berkshire, was forced to scale down his charity festivities after Wokingham District Council took legal action. 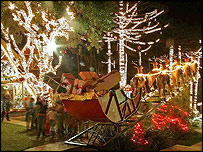