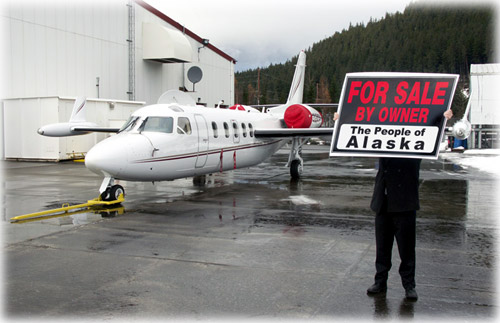 It was not the sharp Alaskan winds or the dicey takeoffs among the fjords of Juneau that finally grounded the Westwind II jet used by Frank H. Murkowski as governor. It was the weight of all that political baggage.

Barely a week after taking office, Gov. Sarah Palin, a Republican who trounced Mr. Murkowski in an August primary and went on to win the general election in a landslide, says she is following through on one of her campaign promises: She is getting rid of the jet, which Mr. Murkowski, provoking a public backlash, bought against the wishes of the Legislature.

The Murkowski administration acquired the plane, the state’s only jet, for $2.692 million in November 2005, using a special account after it was denied money for the purpose by the Legislature and the federal government. The aircraft came to symbolize what critics called Mr. Murkowski’s disconnection from Alaska voters, who often frown on government excess though they are routinely among the country’s biggest beneficiaries of federal spending.

Now the plane will be put up for sale on eBay, Governor Palin’s office said.

“The purchase of the jet was impractical and unwise, and it’s time to get rid of it,” the governor said in a statement on Tuesday. “In the meantime, I’m keeping my promise not to set foot on the jet.”

The state has previously sold ferries and patrol boats on eBay. Stateofalaskasurplus is its seller name.

Many of Alaska’s cities and towns are reachable only by plane or ferry. Ms. Palin will most likely fly commercial or use a state-owned King Air turboprop, which is slower than the jet but which, unlike it, can land on rural runways, said Greg Wilkinson, a spokesman for the Department of Public Safety, which operates state-owned planes.

Mr. Murkowski primarily used the jet, which seats up to nine, to shuttle between Juneau, the state’s remote capital, and Anchorage, its largest city, Mr. Wilkinson said. When the plane was not carrying the governor, it often transported Alaska inmates who were to be imprisoned in Arizona under an agreement between the two states.

Initially yesterday, Mr. Wilkinson referred questions about the jet to the department’s new commissioner, Walt Monegan, appointed by Ms. Palin, only to be told that Mr. Monegan’s office had referred questions to him. He laughed, noting the previous administration’s sensitivity about the subject.

“My old standing orders were you don’t talk about the jet,” he said.