Obesity is so revered among Mauritania’s white Moor Arab population that the young girls are sometimes force-fed to obtain a weight the government has described as "life-threatening". 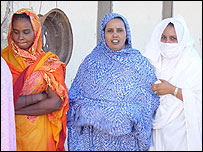 A generation ago, over a third of women in the country were force-fed as children – Mauritania is one of the few African countries where, on average, girls receive more food than boys.

Now only around one in 10 girls are treated this way. The treatment has its roots in fat being seen as a sign of wealth – if a girl was thin she was considered poor, and would not be respected.
But in rural Mauritania you still see the rotund women that the country is famous for. They walk slowly, dainty hands on the end of dimpled arms, pinching multicoloured swathes of fabric together to keep the biting sand from their faces.
"I make them eat lots of dates, lots and lots of couscous and other fattening food," Fatematou, a voluminous woman in her sixties who runs a kind of "fat farm" in the northern desert town of Atar, told BBC World Service’s The World Today program.
Although she had no clients when I met her, she said she was soon expecting to take charge of some seven-year-olds.
"I make them eat and eat and eat. And then drink lots and lots of water," she explained.
"I make them do this all morning. Then they have a rest. In the afternoon we start again. We do this three times a day – the morning, the afternoon and the evening."
Punishment
She said the girls could end up weighing between 60 to 100 kilograms, "with lots of layers of fat."
Fatematou said that it was rare for a girl to refuse to eat, and that if they did, she was helped by the child’s parents.
"They punish the girls and in the end the girls eat," she said.
"If a girl refuses we start nicely, saying ‘come on, come on’ sweetly, until she agrees to eat."
Fatematou admitted that sometimes the girls cried at the treatment.
"Of course they cry – they scream," she said.
"We grab them and we force them to eat. If they cry a lot we leave them sometimes for a day or two and then we come back to start again.
"They get used to it in the end."

She argued that in the end the girls were grateful.
"When they are small they don’t understand, but when they grow up they are fat and beautiful," she said.
"They are proud and show off their good size to make men dribble. Don’t you think that’s good?"
Change
However, the view that a fat girl is more desirable is now becoming seen as old-fashioned.
A study by the Mauritanian ministry of health has found that force-feeding is dying out. Now only 11% of young girls are force fed.
"That’s not how people think now," Leila – a woman in the ancient desert town of Chinguetti, who herself was fattened as a child – told The World Today.
"Traditionally a fat wife was a symbol of wealth. Now we’ve got another vision, another criteria for beauty.
"Young people in Mauritania today, we’re not interested in being fat as a symbol of beauty. Today to be beautiful is to be natural, just to eat normally."
Some men are also much less keen on having a fat wife – a reflection of changes in Mauritanian society.

"We’re fed up of fat women here," said 19-year-old shop owner Yusuf.
"Always fat women! Now we want thin women.
"In Mauritania if a woman really wants to get married I think she should stay thin. If she gets fat it’s not good.
"Some girls have asked me whether they should get fat or stay thin. I tell them if you want to find a man, a European or a Mauritanian, stay thin, it’s better for you. But some blokes still like them fat."
And while there still men who like their women big, Fatematou is on hand to fatten them up with her years of experience.
I asked her if she ever felt cruel, beating and force feeding children?
"No! It’s not cruel to make girls fat!" she said.
"Me, I’ve seen 10-year old girls give birth. I tell you, 10 years old!
"Once they are fat and beautiful they can serve their men well, once they are fat they can be married."