Huge celebrations have been held in Romania and Bulgaria to mark their accession to the European Union, 17 years after the fall of Communism. Their entry brings EU membership to 27 – up from 15 three years ago – and a population of half a billion. 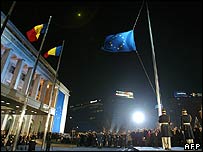 Officials celebrated as the EU flag was raised in Bucharest
"It was hard, but we arrived at the end of the road. It is the road of our future. It is the road of our joy," Romanian President Traian Basescu said, as tens of thousands of revellers cheered.
"We arrived in Europe. Welcome to Europe," Mr Basescu said on stage in University Square, where he was joined by EU Enlargement Commissioner Olli Rehn and government ministers.
Foreign ministers of Germany, Denmark, Austria and Hungary, who were also attending, wished Romanian citizens a happy new year.
Earlier, the EU flag was raised outside the government headquarters in Bucharest to the European anthem, Beethoven’s Ode to Joy.
In Sofia, a pyramid of light illuminated the sky, with rays emanating from the city’s Orthodox cathedral, its Armenian church, a synagogue, a mosque and another church.
Thousands of people in Battenberg Square cheered as midnight struck. Fireworks lit the sky over the building where the Communist Party once held its headquarters.
In an emotional address to the nation, Bulgarian President Georgi Parvanov called the country’s EU entry a "heavenly moment".
"The day we are welcoming – 1 January 2007 – will undoubtedly find its place among the most important dates in our national history.
"But let’s make it clear, our future success as a nation depends not on European funds and resources, but on our own work," he said.
‘Falling enthusiasm’
The accession of the two new countries comes amid falling enthusiasm in Europe for the bloc’s continuing expansion.
A recent Eurobarometer poll suggested only 41% of people in the 15 states that were part of the EU before 2004 supported further enlargement.
The two new countries will now be subject to strict monitoring, to ensure they make more progress in the fight against corruption and organised crime.
They face export bans on certain foods, and Bulgaria has been warned that 55 of its aircraft could be grounded unless they reach EU safety standards.
Analysts say there is a risk that EU aid will be mis-spent, or just not taken up because the countries’ institutions are too disorganised.
There are also fears that the countries’ economies will fail to compete with the rest of the EU’s once trade barriers come down.
Immigration fears
Both Bulgaria and Romania are much poorer than the rest of the EU, with GDP per capita of about 33% of the EU average, compared with 50% in Poland.
Some Western European member states fear a flood of new immigrants, but officials in both countries say most of those who wanted to work abroad have already left.
Most of the 15 older EU member states have put in place restrictions on the free movement of workers from the two new members – though Finland and Sweden are two exceptions.
Most of the 10 newer member states, including Poland, say they will erect no barriers.
Bulgaria closed two reactors of its Kozloduy nuclear power station in the hours before joining the EU – one of the last remaining conditions of membership.
Also on 1 January, Slovenia became the first of the 10 states which joined the EU in 2004 to adopt the European currency, the euro.
The existing Slovenian currency, the tolar will remain in dual use with the euro for 14 days.
Germany also takes over from Finland for six months as the country holding the presidency of the European Union.