For what experts say is probably the first time, more American women are living without a husband than with one, according to a New York Times analysis of census results.

In 2005, 51 percent of women said they were living without a spouse, up from 35 percent in 1950 and 49 percent in 2000.
Coupled with the fact that in 2005 married couples became a minority of all American households for the first time, the trend could ultimately shape social and workplace policies, including the ways government and employers distribute benefits.
Several factors are driving the statistical shift. At one end of the age spectrum, women are marrying later or living with unmarried partners more often and for longer periods. At the other end, women are living longer as widows and, after a divorce, are more likely than men to delay remarriage, sometimes delighting in their newfound freedom.
In addition, marriage rates among black women remain low. Only about 30 percent of black women are living with a spouse, according to the Census Bureau, compared with about 49 percent of Hispanic women, 55 percent of non-Hispanic white women and more than 60 percent of Asian women.
In a relatively small number of cases, the living arrangement is temporary, because the husbands are working out of town, are in the military or are institutionalized. But while most women eventually marry, the larger trend is unmistakable.
“This is yet another of the inexorable signs that there is no going back to a world where we can assume that marriage is the main institution that organizes people’s lives,” said Prof. Stephanie Coontz, director of public education for the Council on Contemporary Families, a nonprofit research group. “Most of these women will marry, or have married. But on average, Americans now spend half their adult lives outside marriage.”

Professor Coontz said this was probably unprecedented with the possible exception of major wartime mobilizations and when black couples were separated during slavery.

William H. Frey, a demographer with the Brookings Institution, a research group in Washington, described the shift as “a clear tipping point, reflecting the culmination of post-1960 trends associated with greater independence and more flexible lifestyles for women.”
“For better or worse, women are less dependent on men or the institution of marriage,” Dr. Frey said. “Younger women understand this better, and are preparing to live longer parts of their lives alone or with nonmarried partners. For many older boomer and senior women, the institution of marriage did not hold the promise they might have hoped for, growing up in an ‘Ozzie and Harriet’ era.”
Emily Zuzik, a 32-year-old musician and model who lives in the East Village of Manhattan, said she was not surprised by the trend.
“A lot of my friends are divorced or single or living alone,” Ms. Zuzik said. “I know a lot of people in their 30s who have roommates.”
Ms. Zuzik has lived with a boyfriend twice, once in California where the couple registered as domestic partners to qualify for his health insurance plan. “I don’t plan to live with anyone else again until I am married,” she said, “and I may opt to keep a place of my own even then.”
Linda Barth, a 56-year-old magazine editor in Houston who has never married, said, “I used to divide my women friends into single friends and married friends. Now that doesn’t seem to be an issue.”
Sheila Jamison, who also lives in the East Village and works for a media company, is 45 and single. She says her family believes she would have had a better chance of finding a husband had she attended a historically black college instead of Duke.
“Considering all the weddings I attended in the ’80s that have ended so very, very badly, I consider myself straight up lucky,” Ms. Jamison said. “I have not sworn off marriage, but if I do wed, it will be to have a companion with whom I can travel and play parlor games in my old age.”
Carol Crenshaw, 57, of Roswell, Ga., was divorced in 2005 after 33 years and says she is in no hurry to marry again.
“I’m in a place in my life where I’m comfortable,” said Ms. Crenshaw, who has two grown sons. “I can do what I want, when I want, with whom I want. I was a wife and a mother. I don’t feel like I need to do that again.”

Similarly, Shelley Fidler, 59, a public policy adviser at a law firm, has sworn off marriage. She moved from rural Virginia to the vibrant Adams Morgan neighborhood of Washington, D.C., when her 30-year marriage ended.

“The benefits were completely unforeseen for me,” Ms. Fidler said, “the free time, the amount of time I get to spend with friends, the time I have alone, which I value tremendously, the flexibility in terms of work, travel and cultural events.”

Among the more than 117 million women over the age of 15, according to the marital status category in the Census Bureau’s latest American Community Survey, 63 million are married. Of those, 3.1 million are legally separated and 2.4 million said their husbands were not living at home for one reason or another.
That brings the number of American women actually living with a spouse to 57.5 million, compared with the 59.9 million who are single or whose husbands were not living at home when the survey was taken in 2005.
Some of those situations, which the census identifies as “spouse absent” and “other,” are temporary, and, of course, even some people who describe themselves as separated eventually reunite with their spouses.
Over all, a larger share of men are married and living with their spouse — about 53 percent compared with 49 percent among women.
“Since women continue to outlive men, they have reached the nonmarital tipping point — more nonmarried than married,” Dr. Frey said. “This suggests that most girls growing up today can look forward to spending more of their lives outside of a traditional marriage.”
Pamela J. Smock, a researcher at the University of Michigan Population Studies Center, agreed, saying that “changing patterns of courtship, marriage, and that we are living longer lives all play a role.”
“Men also remarry more quickly than women after a divorce,” Ms. Smock added, “and both are increasingly likely to cohabit rather than remarry after a divorce.” 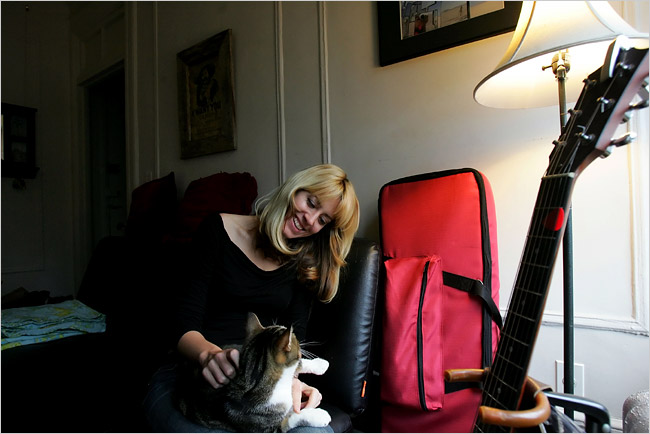 The proportion of married people, especially among younger age groups, has been declining for decades. Between 1950 and 2000, the share of women 15-to-24 who were married plummeted to 16 percent, from 42 percent. Among 25-to-34-year-olds, the proportion dropped to 58 percent, from 82 percent.
“Although we can help people ‘do’ marriage better, it is simply delusional to construct social policy or make personal life decisions on the basis that you can count on people spending most of their adult lives in marriage,” said Professor Coontz, the author of “Marriage, a History: How Love Conquered Marriage.”
Besse Gardner, 24, said she and her boyfriend met as college freshmen and started living together last April “for all the wrong reasons” — they found a great apartment on the beach in Los Angeles.
“We do not see living together as an end or even for the rest of our lives — it’s just fun right now,” Ms. Gardner said. “My roommate is someone I’d be thrilled to marry one day, but it just doesn’t make sense right now.”
Ms. Crenshaw said that some of the women in her support group for divorced women were miserable, but that she was surprised how happy she was to be single again.
“That’s not how I grew up,” she said. “That’s not how society thinks. It’s a marriage culture.”
Elissa B. Terris, 59, of Marietta, Ga., divorced in 2005 after being married for 34 years and raising a daughter, who is now an adult.

“A gentleman asked me to marry him and I said no,” she recalled. “I told him, ‘I’m just beginning to fly again, I’m just beginning to be me. Don’t take that away.’ ”
“Marriage kind of aged me because there weren’t options,” Ms. Terris said. “There was only one way to go. Now I have choices. One night I slept on the other side of the bed, and I thought, I like this side.”
She said she was returning to college to get a master’s degree (her former husband “didn’t want me to do that because I was more educated than he was”), had taken photography classes and was auditioning for a play.
“Once you go through something you think will kill you and it doesn’t,” she said, “every day is like a present.”