Nearly 800 people, said to be part of a network that smuggled women into Italy and forced them to work as prostitutes, have been arrested in a crackdown on the country’s sex-slave trade. 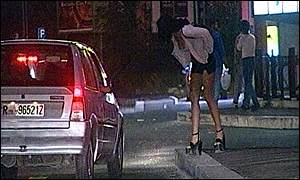 The arrests are a response to the growing outcry over increasingly visible street prostitution, with many roads and lay-bys on the outskirts of cities lined at all hours with scantily clad prostitutes from Eastern Europe and Africa. According to police, there are 70,000 prostitutes in Italy, 90 per cent of them foreigners.

The phenomenon has given rise to a debate in Parliament and the press over whether to reintroduce brothels, abolished in the 1950s.

In co-ordinated raids in 17 regions, police arrested 780 people and opened inquiries into more than 1,000. Almost all are non-Italians.
Gilberto Caldarozzi, the officer in charge of the crackdown, praised 45 prostitutes who had courageously defied their captors by going to the police. All have been given residence permits and round-the-clock protection.
Mr Caldarozzi said that the women were often lured to Italy with promises of work. Some were bought from poor families for as little as €200 (£130). The women earned an average €5,000 a month, he said, but handed it all to their kidnappers, who kept them captive in sordid conditions and beat and raped them.
According to one estimate, a fifth of all foreign prostitutes are minors.
A 16-year-old Romanian girl, named as Maria, told reporters yesterday that she had been sold by her parents and taken to Ladispoli, on the coast north of Rome, where she was “treated like an animal”. Her captors had taken away her passport and mobile phone and put her to work at once on the Via Aurelia, the coast road. She said that she had tried to run away, but had been recaptured and beaten up. She eventually escaped and went to the police.
Police said that there was no overall organisation or “Mr Big”. Instead, groups of pimps formed alliances, in the style of the Mafia, working an agreed turf. Mr Calderozzi said that the Mafia was not directly involved in foreign prostitution but tolerated it.