After 32 years on the trail of Leonardo da Vinci’s lost masterpiece "The Battle of Anghiari," Maurizio Seracini thinks he is on the verge of solving one of the art world’s greatest mysteries.

Medical engineer and conservator Maurizio Seracini (R) works with an assistant in his laboratory in Florence.

The Italian engineer and art expert reckons he knows where the fresco, which disappeared nearly five centuries ago, might be hidden — behind a wall right where it was painted, in Florence’s Renaissance town hall.
Now that the Italian government has given him the go-ahead to complete his investigation, Seracini says he is just a few months away from finding out once and for all.
If he is right, there is no overestimating the importance such a discovery would have.
"At the time of Leonardo the contemporaries considered this not only his best work of art but also ‘the’ best work of art, the masterpiece of all," Seracini said in his office near the Palazzo Vecchio, where he believes the painting is buried.
"So, we are searching for the most important masterpiece of the Renaissance, the highest point ever achieved, and the most important masterpiece of Leonardo," he told Reuters.

"The Battle of Anghiari"

"MIRACULOUS THING"
Florence’s leaders commissioned Leonardo, then at the height of his career, to paint a fresco celebrating the Florentine Republic’s victory over the Milanese in a battle on the plains of Anghiari that took place on June 29, 1440.
Leonardo, who loathed war as "a most beastly madness," started working on the huge mural, thought to be three times the size of "The Last Supper," in 1505. Its central theme was a group of horses and riders furiously fighting for a standard.
But a year later, perhaps disappointed with an experimental technique he used on the fresco that some experts believe damaged it, Leonardo abandoned the painting and left for Milan.
The work, which one chronicler called "a miraculous thing," remains known today through Leonardo’s preliminary sketches of fighters on horseback and copies made by other artists.
But all trace of the original was lost after 16th-century artist and architect Giorgio Vasari renovated the Palazzo Vecchio’s Hall of the 500 that was hosting it.
For long, it was widely believed that the painting had been destroyed and replaced with Vasari’s own frescoes of military battles.
Then Seracini came along.
SEEK AND FIND
"Please don’t make me look like Indiana Jones searching for the Lost Ark," Seracini, who sees himself halfway between an art doctor and a detective, said almost apologetically.
With his unassuming manner, tweed jacket and blue tie, the grey-haired 60-year-old is very different to Steven Spielberg’s adventurous, whip-cracking archaeologist.
Yet the story of his quest for "The Battle of Anghiari" seems the stuff of a movie or a fiction novel like Dan Brown’s "The Da Vinci Code" — which mentions Seracini’s work.
A biomedical engineer with a U.S. degree and a passion for art conservation, Seracini began looking for the painting, sometimes known as "The Lost Leonardo," in 1975.
Exploring inch by inch the huge Vasari mural he thinks might be hiding Leonardo’s fresco, Seracini noticed an inscription, almost invisible from the floor, on a tiny green flag.
"Cerca Trova" — "Seek and You Shall Find," says the cryptic message, the only writing in any of the six battle scenes decorating the Hall of the 500.
"It puzzled me then and it still puzzles me now. It could be an army motto. Or maybe it doesn’t mean anything. But maybe it’s a hint," Seracini said.
Despite the tantalizing finding, Seracini had to abandon his project in 1977. Technology at the time was not advanced enough to explore further without touching Vasari’s fresco, he said.
But in 1999, thanks to funding by Anglo-Irish millionaire Loel Guinness, the search resumed.
And Seracini, using medical and military technology such as thermography, X-ray and radar scans, found another possible clue — a small cavity underneath Vasari’s mural that makes him think Vasari did not destroy the wall where Leonardo had painted, but built another wall in front of it.
"Vasari was a great admirer of Leonardo. He did not have any reasons to destroy, damage or remove Leonardo’s painting. And he used a similar technique to hide the ‘Holy Trinity’ by Masaccio. So maybe he saw he had a chance and he saved it," Seracini said. 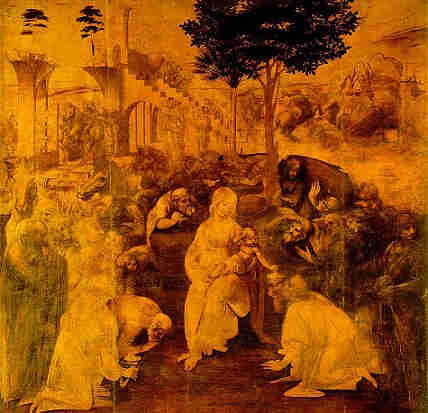 In 2003, Seracini, who had by then come to world attention by discovering that Leonardo’s "Adoration of the Magi" had been heavily painted over by other artists, hit another snag.
The Florence town hall did not renew his permit to continue his search, arguing the evidence was unconvincing. This month, however, the government decided Seracini should go ahead.
Seracini says he needs 10 months to develop a scan that can capture radiations from chemical elements contained in the color pigments used by Leonardo in the fresco — such as lead for white, copper for blue and mercury for red.
Then he can solve the mystery.
"It’s time to go and see if there is something left," he said. And if it’s not there, he would not feel he has wasted his time. "I hope I have proved that we can use scientific methods to understand works of art and preserve our cultural heritage."