Scientific research into the long debated question of whether the toilet seat should be up or down suggests that the social norm of leaving it down is actually inefficient.

An Indian economist, the latest scholar to weigh in on the issue, supports these findings but has devised a series of mathematic formulas to show that when the female "nag" factor is part of the equation, the man would rather deal with the inconvenience than hear the woman yell.
Hammad Al-Sabah Siddiqi, assistant professor at Lahore University of Management Sciences in Pakistan, uses game theory to analyze toilet seat operations, taking into account strategies used — "If you love me, then you would leave the seat down," for example — and alternating seat positions employed by males when performing different toilet tasks.
Mr. Siddiqi writes "assume that the inconvenience cost of changing the seat position is C."
"Now, consider the situation in which John and Marsha decide to cohabitate and both use the same toilet. This situation is popularly known as marriage," he said.
"Suppose Marsha goes to the toilet and finds the seat in the up position, consequently she yells at John inflicting a cost of D on him. "Assume that D>C."
Mr. Siddiqi references the scientific work of Jay Pil Choi, an economics professor at Michigan State University, and Richard Harter, a retired mathematician in South Dakota, who tackled the issue of toilet seat position.
"Leave the toilet seat position as it was used," Mr. Choi said when reached at his home last night. "That is the best option." 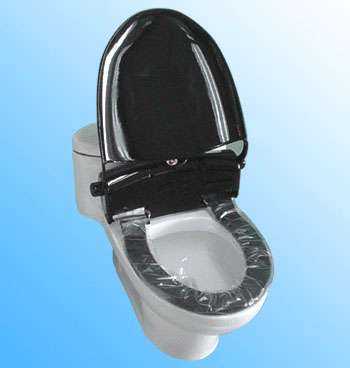 The woman would have to do more, but work would be balanced out between the couple.
Mr. Harter deduced that for the least joint effort, the man would have to leave the lid up half of the time, he said in an interview yesterday. Again, more work for the women but the effort would be shared.
For his calculations, he assumed that both use the toilet with the same frequency.
"Folklore has it that Marsha performs more toilet operations than John, hypothetically because of a smaller bladder. John, however, drinks more beer," he wrote in his paper in 1998. "We shall not discuss his prostate problem."
Mr. Harter’s calculations discount the possibility of the woman agreeing to raise the seat when she is done, noting "no instance of this behaviour has ever been observed in recorded history."
Mr. Siddiqi laments in his paper that though the social norm of leaving the seat down is inefficient, things probably will not change. "We [men] can complain all we like, but this norm is not likely to go away."
His work shows "conclusively that the social norm of leaving the toilet seat down after use decreases welfare and by doing that we hope to convince the reader that social norms are not always welfare enhancing."
In the end, Mr. Harter said, the toilet seat should probably be left down because it is more esthetically pleasing. It is also a built-in solution to what Mr. Harter calls the "doggy drinking" problem — when domestic animals hydrate themselves using the toilet bowl.
Jodi R.R. Smith, president of Mannersmith Etiquette Consulting, agrees with the latter resolution. "Toilets are designed to have the seat down and, in fact, the lid closed," says Ms. Smith, pointing to the Seinfeld episode in which Jerry conceals from his girlfriend the fact he accidentally knocked her toothbrush into the open toilet bowl.
"It’s for pure sanitary and safety considerations."