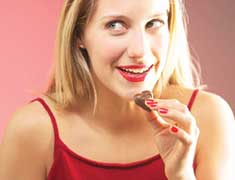 Scientists funded in part by the Mars Inc. candy company delivered the not-unwelcome news Sunday morning during what was described as the first systematic review of chocolate’s effects on learning and memory.
A two-hour symposium on the neurobiology of chocolate, billed as a potentially "mind-altering experience," drew a standing-room-only crowd during the annual meeting in San Francisco of the American Association for the Advancement of Science.
Five years ago, a similar meeting popularized evidence suggesting that flavanols, a chemical found in the beans from which chocolate is made, have beneficial effects on cardiovascular health.
Now it seems chocolate might do even more.
Sunday’s session wasn’t sugarcoated, however: Experts cautioned that chocolate usually loses its flavanols during processing. The latest studies used a specially made laboratory drink extra-rich in flavanols.
Flavanol-type nutrients also can be found in many fruits and vegetables, such as blueberries and pomegranates. Folk wisdom suggesting that darker chocolates contain more of the good stuff turns out to be false.
But brain candy is still candy, it seems.
"Chocolate is a delight, but it can never be a health food," said Norman Hollenberg, a professor at Harvard University who was on Sunday’s panel.
The beneficial brain effects appear to stem from flavanols’ impact on the blood system. In essence, the chemicals stimulate an increase of blood flow to the brain, particularly in areas that light up during tasks that require alertness. Experiments suggest this neurovascular activity is distinct from the well-known stimulant effects of caffeine.
The scientists on Sunday’s panel also distinguished flavanols from flavonols, related antioxidant chemicals found in vascular plants.
So chocolate may be fuel for thought. But the beneficial effects appear to be subtle and may be overwhelmed by other ingredients in the diet.
"The mere presence of a substance does not guarantee activity," said panelist Hagen Schroeter, a Mars researcher formerly on the faculty at UC Davis.
Flavanols’ brain effects are complex, and experts can’t rule out the possibility that our brains get a boost partly because chocolate’s velvety "mouth-feel" and good taste put us in a good mood and even bring up good memories.
Hoping to get past those challenges to research, Henriette van Praag of the Salk Institute in La Jolla gave flavanol-rich cocoa to laboratory mice and plunked them into a vat of opaque water to see if they were better able to find a hidden platform where they could rest.
Although the chocolate-consuming mice found the platform no quicker than control mice, the flavanols clearly strengthened memory of the platform’s location for as long as a week.
Ian Macdonald of the University of Nottingham in the United Kingdom summarized a 2006 brain imaging study that found increased blood flow in women’s brains after study subjects downed a flavanol-rich drink. Macdonald and his colleagues said the findings suggest that cocoa flavanols may have some use in treating certain kinds of stroke and dementia.
Hollenberg summarized studies of indigenous people in Panama with diets rich in cocoa, who had been shown to have low incidences of high blood pressure, cancer and dementia. His latest studies also found evidence of "a striking blood flow response" in people over 50 who were given flavanols over several weeks.
Harold Schmitz, chief science officer at Mars Inc. and leader of Sunday’s symposium, tossed his bosses a bonbon.
"More research examining the potential of cocoa in this important area of public health need is clearly warranted," he said in a news release.