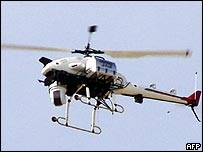 Police in Japan have raided vehicles firm Yamaha in an inquiry into possible illegal helicopter exports to China.

Twenty offices and homes were targeted as part of a probe into whether the company exported pilot-less helicopters with possible military applications.
Yamaha acknowledges selling nine of the aircraft to China, but says they could only be used for agricultural purposes.
Yamaha’s shares tumbled on the news, losing more than 8% and helping to push Tokyo’s main Nikkei 225 index lower.
Muscling in
China’s increased economic and military might, coupled with its growing influence in Asia, have amplified tensions with Japan.
The Ministry of Trade and Industry says Yamaha should have sought official permission before exporting the helicopter to China, which Japan views as a possible military threat.
Japan’s Chief Cabinet Secretary Shinzo Abe said that the worry for the government was that the unmanned helicopters "could be diverted to weapons of mass destruction".
Yamaha expressed surprise over the investigation and denied any wrongdoing. The company says it first sold the helicopters to China five years ago and insists they were basic models that could have no military application.
More than 200 investigators turned up at Yamaha’s headquarters on Monday morning to take away documents and computer data that might point to any breaches of the law.
Earlier problems
The helicopter at the centre of the storm is the R-MAX, which can be flown safely by a relatively untrained operator on the ground using a laptop computer.
Around 1,600 of the helicopters are currently in use in Japan, primarily by farmers for crop-spraying.
However, Yamaha promotes the R-MAX for its other potential uses as well, including surveillance – and that is what appears to have got the company into trouble, says the BBC’s Jonathan Head in Tokyo.
The problems facing Yamaha are the latest to hit Japanese industry. Last week, shares slumped after internet company Livedoor was accused of misleading investors.
Livedoor has denied the charges, but that did little to appease investors and on Wednesday of last week, the Tokyo Stock Exchange had to close 20 minutes early for the first time in its history because of surging trading volumes.