Legal prostitutes are just as happy as women in regular jobs, according to a survey that reports high job satisfaction in parts of the sex industry. 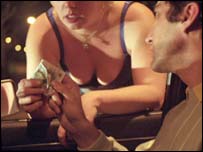 But illegal workers who sell sex on the streets had a much grimmer outlook, with half saying they had been raped or bashed in the past year.
The survey compared the mental and physical health of nearly 250 Queensland prostitutes aged 18 to 57 who worked in registered brothels, at home or on the street.
Legal workers reported similar job satisfaction to women in the general community, but streetworkers were far less happy in the job.
"The general picture is that those women whose families know about their work reported greater job satisfaction than those who kept their work secret," said researcher Charlotte Seib.
Asked why they entered the industry, 82 per cent said they did it for the money and 52 per cent pointed to the flexible working hours.
"And 39 per cent said they had a particular goal in mind such as a new car, a house or a holiday," said Ms Seib, from Queensland University of Technology.
One in four of the women surveyed had a Bachelor degree or higher, which is contrary to the popular stereotype that sex workers came from socially disadvantaged backgrounds.
More than 60 per cent were employed before joining the industry.
Legal workers were mentally on par with other women but streetworkers were far less psychologically stable.
Ms Seib said the reasons for this were complex but probably stemmed from higher rates of child abuse, illicit drug use and violence on the job.
About half said they had been raped or bashed by a client in the past year compared with 12 per cent of private workers and just 3 per cent of brothel workers.
This proved that legalisation of the industry had been effective for those working within legal boundaries but streetworkers were still at risk, Ms Seib said. 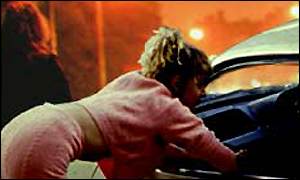