Russian police clubbed protesters and dragged them into waiting buses on Saturday in response to a defiant demonstration against the Kremlin in St. Petersburg.

Several thousand demonstrators chanted "Shame!" as they marched down St. Petersburg’s main avenue to protest against what they said is Russia’s rollback from democracy.
The demonstration, called the March of Those Who Disagree, was a rare gathering of the country’s often fractious opposition. St. Petersburg is President Vladimir Putin’s hometown.

It was at least the third time police have moved in to break up an anti-Kremlin protest in recent months.

St. Petersburg authorities had prohibited the march, only granting permission for a rally far from the city centre, but the activists defied the ban and marched down the Nevsky Prospekt, the city’s main street, blocking traffic. 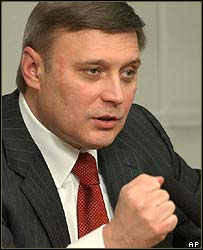 "Unfortunately, we are going through a very difficult time in our country but we will continue to fight for our rights."

The activists accused Putin’s government of cracking down on the opposition, stifling freedom of speech and eating away at democratic institutions by abolishing direct elections of provincial governors and creating an obedient legislature.

Mayor Valentina Matviyenko, a close ally of Putin, called Saturday’s protesters "guest stars from Moscow" and "youths of extremist persuasion," accusing them of stirring turmoil ahead of elections for the city legislature later in March.

"Our city has always had solid democratic traditions," Matviyenko said on Russian state television. "We must allow for the possibility to express criticism of the authorities but in a civilized way."

Riot police beat dozens of protesters with truncheons but several thousand broke through police cordons. They marched toward the city centre and rallied for about 40 minutes until police moved in again, detaining people and dragging them into buses. 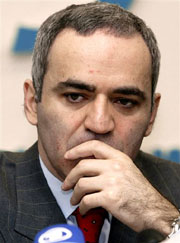 Garry Kasparov, a former world chess champion who helped organize the event, said on Ekho Moskvy radio the participants numbered up to 6,000, though the crowd appeared to be about one-half that number.
Among those detained were the head of the ultranationalist National Bolshevik party and an independent city legislator.

The sidelined and often divided opposition has faced increased harassment in recent years, with protest meetings barred on suspicious legal grounds or party congresses broken up or cancelled for no reason.

In December 2006, police pulled hundreds of opposition activists off buses and trains and detained them ahead of an anti-government demonstration in Moscow.

The National Bolsheviks, led by an ultranationalist novelist and known for political pranks and street theatre targeting Putin, was banned by the Supreme Court in 2005. Authorities have cast it as an extremist force.

St. Petersburg’s mayor said some activists held banners in support of Boris Berezovsky, an exiled tycoon wanted in Russia on money-laundering charges and jailed former billionaire Mikhail Khodorkovsky, who was convicted of fraud and tax-evasion.

Matviyenko suggested the banners meant the protesters were receiving support from dubious sources.

"It is clear how such meetings are financed," she said.

The city election campaign has been marred by allegations of intimidation and harassment after the Yabloko party, one of the country’s two main liberal parties, was eliminated from the ballot for what it called groundless technical reasons.

Elections in a number of Russian provinces later in March are seen as a precursor for December parliamentary balloting and the March 2008 presidential election, in which Putin, who is barred from running for a third consecutive term, has hinted he will choose a successor.

Since he took office in 2000, Putin has taken gradual steps to centralize power. He has created an obedient legislature, abolished direct elections for provincial governors, tightened restrictions on rights groups and presided over the reining in of non-state TV channels.