Older men who drink moderate amounts of alcohol may function better physically than either those who abstain completely or those who abuse alcohol, a new study suggests. 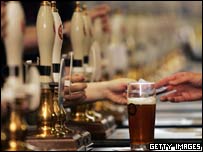 Moderate drinkers tend to be healthier in general than teetotalers or problem drinkers, Dr Peggy Cawthon of California Pacific Medical Centre in San Francisco and colleagues said.
There is also evidence that moderate drinking may reduce inflammation.
Dr Cawthon and colleagues compared functional limitations, physical performance and drinking history for 5962 men aged 65 or older who were classified into five categories. Men who consumed five or more drinks on most days were classified as having a history of sustained excessive drinking, while those who responded positively to a questionnaire used to diagnose alcoholism were classified as problem drinkers.
Moderate drinkers were those who consumed between seven and 20 drinks per week and heavy drinkers were men who consumed 21 or more drinks weekly. Abstainers made up the final group.
Moderate drinkers scored about 3-5 per cent better on tests of physical function than the abstainers, the researchers found, while scores for heavy drinkers were about the same as those for the abstainers.
The abstainers were the most likely to report physical limitations to activities of daily living such as walking, climbing stairs, and doing heavy housework. The heavy alcohol users were only slightly less likely than abstainers to have these limitations.
Low-moderate users, meaning men who drank between seven and 14 drinks a week, were the least likely to have functional limitations, and were at 38 per cent lower risk of having these problems than abstainers.
The researchers call for more detailed studies to determine how alcohol use over time affects how functional status changes with age.