Glow-in-the-dark materials that shine with the whole range of visible colors, and can even produce white light, have been developed by Japanese researchers. 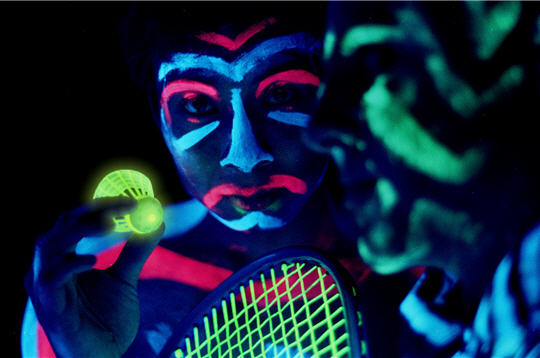 The team from Ryukoku University, Kyoto, say they can be used to provide lighting and clearly readable signs in emergencies without the need for electricity.
Using glow-in-the-dark – or phosphorescent – materials in this way is rare. But the International Commission on Illumination (CIE), the international authority on lighting, has suggested buildings be fitted with emergency lighting and signs that work without power as standard.
New York and Tokyo are considering the idea, says one of the researchers, Mitsunori Saito. He thinks the new material’s ability to emit light across the whole visible spectrum makes glow-in-the-dark emergency lighting more attractive.

"Conventional blue or green phosphors create an eerily uncomfortable illumination environment in which people feel anxiety," Saito explains. They also give poor contrast when used for signs which is a problem when people need to find exits through heavy smoke or dust, he says.
Warmer colours like orange and red will produce more legible signs. "Combining red, green, and blue colours even enables us to create white light, which may provide more natural illumination," Saito says.
Phosphorescent materials absorb energy when exposed to light and emit that energy as light again over long time periods.
Good blue and green phosphorescent compounds have been around for some time but until now red ones lasted minutes instead of hours. Saito and colleagues Naoki Adachi and Hiroyasu Kondo got around this by adding red dye to green and blue phosphors.

The dye molecules absorb light emitted by the base phosphor and emit red light of their own. Mixing the red dye in different proportions with green or blue phosphors makes it possible to produce the full range of visible colours.
Adding the dye does not change the efficiency of the phosphors noticeably, the researchers claim. A 5-minute charge from a fluorescent lamp is enough to make them glow for about three hours.
"Using glow-in-the-dark is not a current strategy for emergency lighting," says Roy Webb at Heriot-Watt University, UK, "but I can see the appeal," he says. Emergency lighting does not need to be very bright because the human eye adapts well to dim conditions, he points out.
But Webb added that the specific benefits of having more colours would need proper testing.
The Japanese team are also exploring less serious uses for their technology. One company is developing a night-light lamp shade that shines all night.