The common pain killer ibuprofen has been found to increase an existing risk of having a heart attack or a stroke in people who suffer from arthritis, research shows today. For some the risk was nine times higher. 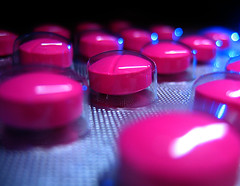 The findings bring more anxiety to the millions of arthritis sufferers in Britain as they follow a series of research studies that have shown increased risk of heart disease from the pain killers they take to ease the condition.
The latest evidence comes from a study of more than 18,000 people who took one of three pain killers for their arthritis.
One patient in 10 was also at high risk of heart attack or stroke and some of these patients took low dose aspirin as well as one of the pain killers for arthritis. For high risk patients taking both aspirin and ibuprofen the risk of a heart attack or stroke was nine times greater, over one year, when compared with those who were taking one of the other arthritis painkillers, lumiracoxib, alone.
In the new research, published in the journal, Annals of Rheumatic Diseases, patients were taking either a high dose of lumiracoxib, a type of drug known as a cox-2 inhibitor, high dose of ibuprofen or naproxen, which are both non-steroidal anti-inflammatory drugs known as NSAIDs.
The study from the cardiovascular institute, Mount Sinai School of Medicine, New York, says that the findings fit with other work that has shown that ibuprofen interferes with the effects of aspirin when it is taken to prevent blood clots.
The researchers, led by Dr Michael E Farkouh, say it is the first time this effect has been shown in arthritis patients. In the study 3,042 patients were at high cardiovascular risk and of these 623 were taking ibuprofen for their arthritis pain. About half of them were also taking aspirin.
The results showed that there was no difference in the total number of heart attacks or strokes among patients who had a low risk of such an event, whichever painkiller they were taking.
The risk was only for those at a high risk of a heart attack or stroke. In this group for those not taking aspirin the risk was higher for people taking lumiracoxib than it was for those taking naproxen. But it was no higher for those taking ibuprofen alone.
Prof Alan Silman, medical director of the Arthritis Research Campaign, said: "This is now a very complicated story. It is not just a simple relationship between ibuprofen and the risk of heart disease alone. It should be noted that people in the trial were taking very high doses of ibuprofen a day (2.4g). Very few people would be taking that amount and there is no evidence at all that at low doses ibuprofen is harmful.
"But there does seem to be this relationship between ibuprofen and aspirin. This is the unexpected finding. You might be losing the protective benefits of aspirin if you also take ibuprofen," he said.
Prof Silman added that people already taking ibuprofen successfully should continue to do so but if they were taking low dose aspirin as well they could talk to their doctor.
A spokesman for the support group, Arthritis Care, said: "Although low dose ibuprofen is now available over the counter, the high levels involved in this test are likely only be taken on prescription, and under medical supervision, by people with severe and chronic pain."