The first phase of MGM MIRAGE’s CityCenter, a gargantuan $7 billion, 66 acre project, is under construction on the Las Vegas Strip between Bellagio and Monte Carlo. 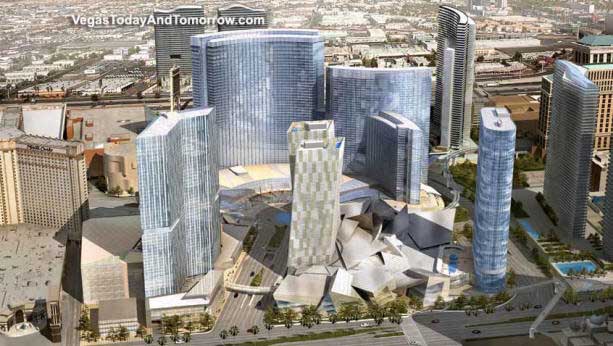 It will eventually occupy the space behind and between Monte Carlo and New York New York as well. The Boardwalk Hotel was demolished along with a few local businesses to make room for this immense project. Harmon Road will meander through CityCenter.

CityCenter will be an urban environment with nicely hidden parking structures, parks and  a complex of rooftop gardens.  The project will be a mini-city with its own Fire Station, an on-site power plant and lots of pedestrian space. CityCenter has achieved LEED certification for the project as outlined by the U.S. Green Building Council.
CityCenter will have a 1/4 mile Strip frontage. The project’s center will be 60-story casino/resort with 4,000-rooms, designed by world renowned architect Cesar Pelli.  There will be plenty of glitz in the form of light shows projected against building facades and plenty of Times Square style neon. Preliminary reports from MGM MIRAGE state that a new Cirque du Soleil show, called Elvis, will premiere at the CityCenter Resort on opening day.
CityCenter will have 8,000 construction workers and 39 cranes on site at the peak of construction and create 12,000 new permanent positions once open.
CityCenter is expected to open phase one in November of 2009 and is currently the single most expensive privately funded project in the western hemisphere.
The Cosmopolitan Resort/Condo-Hotel, being built directly north of the project, is using a similar modern architectural style which will nicely compliment the project.