A hand-held scanner has been invented which can detect serious brain injuries. The device, called an "infrascanner", can spot blood clots on the surface of the brain known as haematomas, which can lead to death or disability if left untreated. 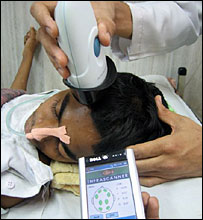 The scanner gives instant results
It is being tested in India, but if successful it could have benefits for patients anywhere.
It was gone 1am when I arrived at the casualty department of Mumbai’s Sion hospital.
Jitendar Bhagat, a 35-year-old lawyer, was in a bad state.
He had come off his motorbike about 24 hours earlier and hit his head. He wasn’t wearing a helmet.
His local hospital did not have a CT scanner so it had taken all that time for him to be transferred to this specialist neurological centre.
Absorbs light
Professor Alok Sharma, the chief neurosurgeon, is testing the hand-held brain scanner.
It is roughly the size of a tin can.
He held it to the patient’s skull and within seconds it wirelessly sent readings to a nearby hand-held computer or PDA.
The infrascanner uses harmless "near-infra-red" light – like that in a TV remote control.
The light beam penetrates the skull up to three centimetres.
A blood clot absorbs near-infra-red light differently to normal brain tissue and the signal is bounced back to the scanner.
A red oval on the readout meant he had a large clot on the right side of his head.
The patient was taken for a CT scan to confirm the diagnosis.
These huge expensive machines use X-rays to give a more fine-detailed image.
But many hospitals in India can’t afford them and, unlike the infrascanner, they are anything but portable.
Early detection
The CT scan confirmed the diagnosis.
Early detection of these injuries is crucial because the blood clot often expands, compressing the brain until the patient dies.
The patient spent two hours in surgery which saved his life. I watched as a drill bored into his skull. Then the clot was washed away.
Rapid detection of these injuries with the infrascanner would mean patients who need specialist treatment could be identified before it is too late.
Professor Alok Sharma said the infrascanner is proving remarkably effective.
"We found a 98% accuracy for showing blood clots or haematomas," he said.
"That is awesome, especially since it’s so easy to use. It is inexpensive compared to a CT scanner, it takes two minutes and it’s completely non-invasive."
Professor Sharma said the device would be extremely useful if it was available in smaller hospitals in India, which cannot afford CT scanners.
The infrascanner could highlight those patients who needed rapid transfer to a specialist unit.
But it could also have uses in the developed world.
Being portable, it could be carried by paramedics to the scene of accidents.
In the event of a major incident, it could be used to prioritise the injured.
US Navy
Mihir Shah, from the company Infrascanner, said the American Navy has invested up to $1 million in the device.
He said the infrascanner could save lives in Iraq, where head trauma has been what he called "the signature trauma" of the war.
And Mihir Shah said it would have major benefits at sea: "If you are on a ship or a submarine and someone has an accident it’s a big decision to evacuate a patient – a handheld detector for haematomas would be priceless."
The infrascanner will never replace CT scans – but could be a highly useful new piece of medical technology.
But that will depend on the outcome of further tests.
If these go well it’s likely to be licensed in India in the next year.
As for the patient who came off his motorbike, he is making a good recovery.