Russian opposition activist Garry Kasparov was among about 170 people arrested as police moved against a banned anti-Kremlin rally in Moscow. 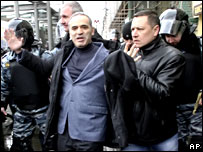 The former chess champion was freed several hours later after being fined $40 (£20) for public order offences.
The huge security operation was launched to prevent protesters from gathering at Pushkin Square.
President Vladimir Putin denies he is trampling on democracy, accusing the opposition of destabilising Russia.
Mr Kasparov leads the United Civil Front group, part of the opposition coalition The Other Russia.
He said he had been "walking with a group of people along the pavement without any slogans" when riot police had surrounded them.
"They grabbed everyone without distinction, without asking any questions," he said.
Before being pushed away, he shouted: "Tell your leaders that this regime is criminal, is a police state. They arrest people everywhere because they are scared stiff."
More than 9,000 police had been drafted into Moscow to prevent the rally going ahead.
Mr Kasparov’s swift arrest followed warnings by the prosecution office on the eve of the march, stating that anyone participating risked being detained.
The security operation in Moscow came as Russia warned it wanted the extradition of London-based exile Boris Berezovsky.
Mr Berezovsky told the UK’s Guardian newspaper he was plotting "revolution" to overthrow Vladimir Putin.
Accusing Mr Putin of creating an authoritarian regime, the tycoon said that Russia’s leadership could only be removed by force.
Later, he clarified his words, stating that he backed "bloodless change" and did not support violence.
Other Russia has called for another massive march in St Petersburg on Sunday, which Moscow has also banned.