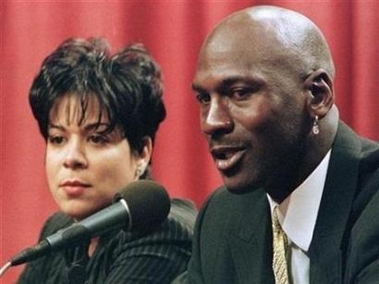 Former basketball superstar Michael Jordan and his wife Juanita Vanoy are shown in this January 13, 1999 file photograph. Jordan’s pending divorce from his wife of nearly 18 years, Chicago bank officer Juanita Vanoy, could end up as the most expensive in entertainment history, Forbes said, if his estranged spouse walks away with half his fortune.

With Jordan having earned much of his wealth during his marriage, most of it through endorsement deals, Vanoy (who filed for divorce last year) stands to collect more than $150 million, the magazine said.
A close second would be the estimated $150 million settlement Diamond paid to onetime TV production assistant Marcia Murphey, whom he married in 1969 before his breakthrough album, "Touching You, Touching Me," went gold, Forbes said.
They divorced in 1996. Diamond later said Murphey, his second wife, was "worth every penny," according to Forbes.
Spielberg’s first marriage, to actress Amy Irving, ended in 1989 with his ex-spouse awarded roughly half of the filmmaker’s fortune, about $100 million, ranking No. 3 on Forbes’ list.
The magazine said Irving won that settlement after successfully contesting their prenuptial agreement, reportedly scribbled on a napkin, because she had lacked legal representation.
Actor Harrison Ford ranks No. 4 on the list with an estimated $85 million paid to his first wife, Melissa Mathison, who Forbes said negotiated a piece of his future earnings from films made while they were married.
Fellow screen star Kevin Costner landed in fifth place for an estimated $80 million settlement obtained by his first spouse, Cindy Silva, whose 16-year marriage to the actor spanned his peak earning years.
Forbes ranked the pending divorce between former Beatle Paul McCartney and ex-model Heather Mills at No. 6, based on reports suggesting she may collect more than $60 million of Sir Paul’s $700 million net worth.
Another rock superstar, Rolling Stone Mick Jagger, got off much easier, giving up a fraction of his estate — $15 million to $25 million — to Texas supermodel Jerry Hall after he successfully challenged the legality of their 1990 Balinese wedding ceremony and obtained an annulment.
Still that sum was enough to land Jagger on Forbes’ list at No. 10.
Rounding out the roster are film director James Cameron (No. 7), who paid an estimated $50 million — half of what he earned for "Titanic" — to settle his divorce from actress Linda Hamilton; Michael Douglas (No. 8) for an estimated $45 settlement to his first wife, Diandra; and singer Lionel Richie (No. 9) for an estimated $20 million he paid to his second wife, Diane.