Who would have ever thought that cookies made of jellyfish would become a hit product? 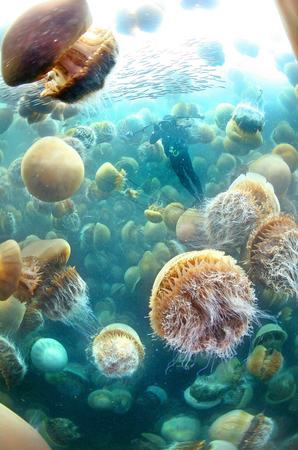 Mouthwatering cookies called Ekura-chan have done just that.
The incredible edibles were jointly developed by Obama Fisheries High School and Fukui-based gift retailer Keifuku Shoji Co.
After hitting the market last October, more than 20,000 Ekura-chan cookies have been sold, far exceeding expectations.
The baked goodies–made of huge Echizen kurage jellyfish that is a nuisance to fishermen–also hit the shelves at a department store in Osaka’s Minami district.
To find ways to commercialize untapped marine resources, students at the fisheries school’s food industry department have since 2002 been developing tofu and fruit punch using jellyfish.

While developing these products, the students hit on the idea of turning jellyfish essence into a baking powder, which is odorless and tastes like bittern.
At the same time, Keifuku Shoji approached the school to jointly commercialize products made from jellyfish.
The students whipped up test batches of cookies containing the jellyfish powder and eventually perfected the recipe.
Their efforts paid off as customers say the cookies are delicious.
A box of 10 cookies costs 580 yen and are sold at gift shops in Obama and at kiosks at JR Fukui Station.
The cookies were also sold at a department store in Osaka on March 10 as part of an exhibit of Fukui Prefecture products. The event was organized by the Fukui prefectural government and lasted from March 7 to 13.
Four second-year students from the fisheries school staffed the sales counter. They touted the health-promoting collagen and minerals contained in the jellyfish cookies.
"Customers said the cookies tasted great," says Marina Furukawa, 17, who helped with the sales.
Keifuku Shoji, which targeted sales of 10,000 cookies a year, has seen that figure double in just the first six months.
The fisheries school plans to begin in May developing desserts baked with jellyfish powder for such products as jelly and rice cakes.