Tiny "smart" devices that can be borne on the wind like dust particles could be carried in space probes to explore other planets, UK engineers say. The devices would consist of a computer chip covered by a plastic sheath that can change shape when a voltage is applied, enabling it to be steered. 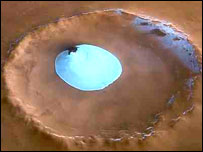 Sand grain-sized particles could ride on Martian winds
Details were presented at the National Astronomy Meeting in Preston.
Dr John Barker, from the University of Glasgow, said the particles could use wireless networking to form swarms.
The idea of using millimetre-sized devices to explore far-flung locations is nothing new, but Dr Barker and his colleagues are starting to look in detail at how it might be achieved.
The professor at Glasgow’s Nanoelectronics Research Centre told delegates at the Royal Astronomical Society gathering that computer chips of the size and sophistication required to meet the challenge already existed.
Smart dust could be packed into the nose cones of planetary probes and then released into the atmospheres of planets, where they would be carried on the wind. For a planet like Mars, smart dust particles would each have to be the size of a grain of sand.
By applying a voltage to alter the shape of the polymer sheath surrounding the chip, dust particle could be steered towards a target, even in high winds.
The swarm
The polymer sheath surrounding the computer chip could be made to wrinkle or flatten out.
Wrinkling the plastic sheath would increase the drag on the particle, lifting it higher on the wind. Flattening out the sheath would cause the particle to plummet.
Wireless networking would allow these particles to form swarms, and Dr Barker’s team has carried out mathematical simulations to see how this would work.
"We envisage that most of the particles can only talk to their nearest neighbours but a few can communicate at much longer distances.
"In our simulations, we have shown that a swarm of 50 dust particles can organise themselves into a star formation, even in turbulent wind."
The ability to fly in formation would allow the processing of data to be spread, or "distributed" between all the chips, and a collective signal to be beamed back to a "mothership".
Small sensors
Scientists have already demonstrated smart dust that crams sensors, power sources, digital communications and processing circuitry into a volume of a few cubic centimetres.
If they were to be used for planetary exploration, smart dust particles would have to carry sensors. But current chemical sensors would be too large to be carried on particles the size of sand grains.
The scientists hope the pace of miniaturisation will make smaller sensors available in coming decades.
"We are still at an early stage, working on simulations and components," said Dr Barker.
"We have a lot of obstacles to overcome before we are even ready to physically test our designs."
Many other applications have been proposed for smart dust. One idea is to use particles to gather information on battlefields. Another idea involves mixing the particles into concrete to internally monitor the health of buildings and bridges.