Officials in the Venezuelan capital, Caracas, are taking to the air in an attempt to make the city safer. The council has bought three mini remote-controlled airships which are soon to be launched to look down on the city monitoring criminal activity. 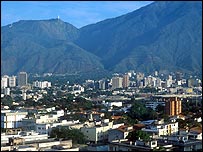 Caracas has the world’s worst figures for gun crime death
Each has a camera mounted on it, which beams back pictures to a control room.
The Venezuelan capital is regarded as one of the most dangerous cities in Latin America, with gun crime a particular problem.
There were a few strange looks skywards in Caracas as the new mini Zeppelin took to the skies.
Steered by remote control from the ground, the balloon ducked and dived above the buildings, its pilot showing how manoeuvrable the machine can be.
Presidential plan
The 15 metre (49 foot) long air ships are emblazoned with government slogans. Written in bright red are the words: "We watch over you for your security."
Some might worry that this will be intrusive – a big brother in the skies, spying on people the government wants to watch.
But the man in charge of security in Caracas, Ramon Morales Rossi, played down that idea.
"Our intention is to reduce criminal activity in the city, that’s a big problem, something the presidency has recognised," he said.
"It’s part of a plan – working with the people, better education, better police officers and better equipment for the police."
Security, or the lack of it, is a big concern for many here. Caracas is one of the most dangerous cities in Latin America.
The government has stopped publishing crime figures, but last year the UN said that per capita there were more deaths from guns than anywhere else in the world.
Working under the gaze of the balloon, the people I spoke to backed this up.
"It’s good that there’s a greater police presence. It’s indispensable. Where’s there no police presence, there’s no security," said one. "Obviously I think this is the right thing to do. But we need as much security on the ground as in the air."
The eyes in the sky will be controlled from a new base that is being kitted out in the city centre.
Most Caracas residents agree something needs to be done to make the city safer. As they are watched, they will be watching too to see if these hi-tech machines make any difference to their lives.