The amount of litter on Britain’s beaches has increased by more than 90% since 1994, says an annual survey. The Marine Conservation Society’s (MCS) Beachwatch survey of 358 areas found an average of two items of litter for each metre (3.3ft) of beach. 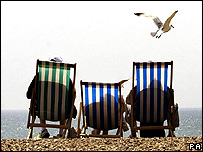 Individuals are the worst offenders, either for direct litter-dropping or wrongly flushing items, such as cotton buds, that end up on beaches.
Fishing debris was another key source, accounting for about 11% of litter.
The survey recorded litter levels of 1,988.7 items per kilometre (0.62 miles) in 2006, up from 1,045 items per kilometre in 1994
MCS said individuals were responsible for more than a third of the litter and many of the top ten items.
Emma Snowden, from the MCS, told BBC News: "Beach visitors are contributing to the majority of litter left on our beaches which is a real shame as nobody wants to visit a dirty beach.
"Unfortunately they are the main culprits, so we are asking everybody to please dispose of their waste properly, take it home with you, and please don’t flush items down the toilet – don’t use it as a wet dustbin."
Ms Snowden added that many litter items were not just "unsightly" but were made of plastic which persists for many years in the marine environment.
Campaign call
The number of cigarette stubs – now the eighth most common item found – had steadily increased over the years and had potential to climb even higher as smoking moves outdoors, said the charity.
MCS is calling for a UK-wide environmental education campaign to change litter-dropping and flushing habits.
Its 2006 report is based on data collected by more than 4,000 volunteers on 358 UK beaches – covering 187 km (116 miles) of coastline – during September 16 and 17 2006.
More than 370,000 litter items were removed during the process.
Their figures suggested the top sources of litter were beach visitors, fishing debris, sewage related debris/sanitary waste and shipping litter.
Scotland had the highest levels of sewage-related debris, made up of cotton buds, tampons, pant liners and condoms.
The density of this kind of litter in Scotland – 694.5 items per km – was more than three times the UK average of 205.9/km, and accounted for 33.2% of all litter in the country.