Women who drink the equivalent of roughly two bottles of wine over a weekend more than double their risk of breast cancer, say Danish researchers. 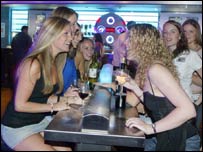 Experts warn more and more women are taking up drinking
A study of 17,647 nurses found twice the risk of breast cancer in women who drank 22-27 drinks a week compared with those who drank one to three drinks.
The risk was greatest when drinks were consumed in a short period, reported the European Journal of Public Health.
Experts said women should try and limit the amount of alcohol they drank.
Women in the study were aged over 44, and most drank a moderate amount of alcohol.
A drink was classed as a bottle of beer or a glass of wine or spirit, which in Denmark is roughly 12g of alcohol.
In the UK, a unit of alcohol is around 8g.
More than a quarter of the women drank more than the recommended 14 drinks a week.
One in 10 were week-day binge drinkers, having more than four drinks a day and 13% were weekend binge drinkers, defined as more than 10 drinks between Friday and Sunday.
There was a 2% increased risk of breast cancer for each additional drink consumed, but at weekends there was a 4% increased risk with each additional drink.
The researchers said this was because more drinks were likely to be consumed in a weekend drinking session.
Drinking 22-27 drinks over the course of the week was linked to a 130% increased risk.
Those who drank excessively on just one day during the week increased their risk by 55%.
Oestrogen
The researchers said higher alcohol intake may increase levels of oestrogen – a hormone associated with the development of breast cancer.
Dr Lina Morch a researcher in the Centre for Alcohol Research in Denmark, who led the study, said: "What our study suggests is that the total amount of alcohol consumed has a detrimental effect on the risk of breast cancer, but also the drinking pattern seems to have an impact on the risk.
"When more drinks are consumed within a limited time frame the concentration of alcohol in the blood peaks, which we suppose is more harmful than when the same amount of alcohol is consumed over longer time periods."
She advised women to drink moderate amounts of alcohol and to avoid consuming lots of drinks in one day.
Figures from the Health Survey for England in 2003 showed that 23% of women aged between 16 and 24 drank over 21 units a week.
A previous study by Cancer Research UK found that a woman’s risk of breast cancer increases with every additional daily drink of alcohol.
Dr Alison Ross, Cancer Research UK’s science information officer, said: "Researchers estimate that alcohol causes at least 2,000 breast cancer cases every year in the UK.
"Even small amounts of alcohol can increase the risk of breast cancer. Other research has shown an increase of risk of 7% for each alcoholic drink consumed on a daily basis.
"To reduce the risk of breast cancer our advice remains to limit the amount of alcohol you drink and try to keep a healthy body weight."