One in 30 fetuses aborted for medical reasons is born alive, a 10-year study at 20 UK hospitals has found. 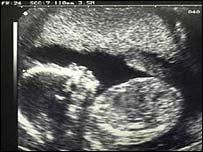 Abortion is legal in Britain up to 24 weeks
Most of these babies with disabilities were born between 20 and 24 weeks of pregnancy and all lived for no more than a few hours.
Anti-abortion campaigners said the figures in the British Journal of Obstetrics and Gynaecology study were likely to be the tip of the iceberg.
But abortion experts said such incidents were extremely rare.
Abortion rates
About 190,000 abortions take place annually in England and Wales. This is nearly a quarter of all pregnancies.
Most abortions are carried out on "healthy" fetuses for social reasons.
The study, however, looked at the outcomes of 3,189 abortions performed between 1995 and 2004 because the fetus had a disability of some kind.
It showed that 102 – or around one in 30 – were born alive.
Julia Millington of the pro-life group Alive and Kicking Campaign said the rates found at West Midlands hospitals studied were likely to be mirrored elsewhere in the UK.
She explained: "If 102 out of 3,189 babies aborted for reasons of impairment are born alive, then how many healthy babies must be surviving?
"It is difficult to comprehend the number of babies, throughout the country, left fighting for their lives."
Abortion is allowed in Britain up to the 24th week of pregnancy. Beyond this, a termination is only sanctioned if the foetus has a severe disability or if the mother’s life is at risk.
Safeguards
Usually, the fetus will not survive the procedure.
The Royal College of Obstetricians and Gynaecologists said it had "very strong" guidelines on terminations of pregnancy after 22 weeks.
According to the guidelines, after 22 weeks and beyond, if there are signs of major fetal abnormality and the patient has requested an abortion, the patient should be offered feticide, where a lethal injection is administered.
The patient has every right to refuse this course of action. If the baby is born alive, palliative care should be provided till the baby dies.
Theoretically, such an event could result in a doctor being accused of murder if a "deliberate act" – that is, legal abortion – were to be followed by a live birth and the subsequent death of the child because of immaturity.
An RCOG spokesman said an expert group was examining the management of cases when babies are born before 21 weeks 6 days and will produce a report with guidelines in due course.
Ann Furedi, chief executive of the British Pregnancy Advisory Service, stressed that termination due to a diagnosis of a severe or life-threatening disability in the fetus was rare.
"It would be wrong to imply from this retrospective study, that if women undergo a medical induction abortion at under 24 weeks’ gestation for reasons aside from fetal abnormality, that this is at all likely to result in a live birth.
"Doctors working in abortion care have for some years now followed the Royal College of Obstetricians and Gynaecologist’s guidance, that the fetal heart is stopped before a medical induction abortion around 22 weeks’ gestation."
She added: "To end a wanted pregnancy because of severe fetal impairment is, understandably, a very difficult choice for women and couples."
A spokeswoman from the charity Antenatal results and Choices said: "Feticide is technically demanding and stressful for parents and professionals alike.
"Enforcing the procedure in cases where death is the inevitable outcome either as a means to reduce apparent perinatal mortality figures or to satisfy those who do not support the legal availability of abortion will not benefit anyone."