The most enticing property yet found outside our solar system is about 20 light years away in the constellation Libra, a team of European astronomers said today. 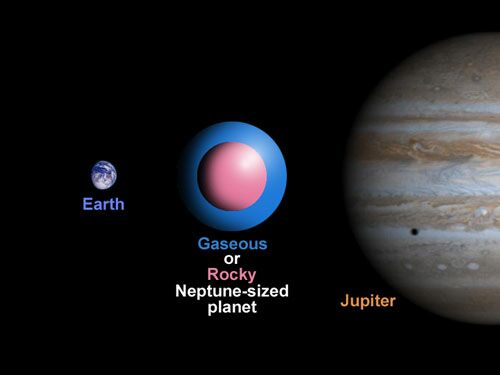 The astronomers have discovered a planet five times as massive as the Earth orbiting a dim red star known as Gliese 581.

It is the smallest of the 200 or so planets that are now known to exist outside of our solar system, called extrasolar or exoplanets. Moreover, it orbits its home star within the so-called habitable zone where surface water, the staff of life, could exist if other conditions are right, said Stephane Udry of the Geneva Observatory.
“We are at the right place for that,” said Dr. Udry, the lead author of a paper describing the discovery that has been submitted to the journal Astronomy & Astrophysics.
But he and other astronomers cautioned that it was far too soon to conclude that liquid water was there without more observations. Sara Seager, a planet expert at the Massachusetts Institute of Technology said, “For example, if the planet had an atmosphere more massive than Venus’s, then the surface would likely be too hot for liquid water.”
Nevertheless, the discovery in the Gliese 581 system, where a Neptune-size planet was discovered two years ago and another planet of eight Earth masses is now suspected, catapults that system to the top of the list for future generations of space missions.
“On the treasure map of the Universe, one would be tempted to mark this planet with an X,” said Xavier Delfosse, a team member from Grenoble University in France, according to a news release from the European Southern Observatory, a multinational collaboration based in Garching, Germany.
“It’s 20 light years. We can go there,” said Dimitar Sasselov, of the Harvard-Smithsonian Center for Astrophysics, who studies the structure and formation of planets.
The new planet was discovered by the wobble it causes in its home star’s motion as it orbits, the method by which most of the known exo-planets have been discovered. Dr. Udry’s team used an advanced spectrograph on a 141-inch diameter telescope at the European observatory in La Silla, Chile.
The smallest previous exo-planet was roughly six Earth masses, discovered by a team led by the American planet hunters Geoff Marcy of the University of California, Berkeley, and Paul Butler of the Carnegie Institution of Washington. The two astronomers are longtime rivals of the Swiss group founded by Michel Mayor, of the Geneva Observatory. Of the new result, Dr. Marcy said, “The Swiss do excellent work, so I’m sure that they have a strong case for it.”
The planet, officially known as Gliese 581c, circles the star every 13 days at a distance of about 7 million miles. According to models of planet formation developed by Dr. Sasselov and his colleagues, such a planet should be about half again as large as the Earth and be composed of rock and water, what the astronomers now call a “super Earth.”

The most exciting part of the new find, Dr. Sasselov said, is that it “basically tells you these kinds of planets are very common.” Because they could stay geologically active for billions and billion of years, Dr. Sasselov said he suspects that such planets could be even more congenial for life than the Earth. NASA’s coming Kepler mission, he added, would probably find hundreds of these super Earths.
Although the new planet is much closer to its star than the Earth is to the Sun, its star, a so-called red dwarf, is only about a hundredth as luminous as the Sun. So 7 million miles is a comfortable cuddling distance.
How hot the planet would get, Dr. Udry said, would depend on how much light the planet reflects, or its albedo. Using the Earth and Venus as two extreme examples, he estimated that temperatures on the surface of the planet should range from 0 to 40 degrees centigrade. “It’s just right in the good range,” he said. “Of course, we don’t know anything about its albedo.”
One problem is that the wobble technique only gives masses of planets. To measure their actual size and thus their densities, astronomers have to catch them in the act of passing in front of or behind their stars. Such transits can also reveal if the planets have atmospheres and what they are made of. Earlier this month, such observations with the Spitzer Space Telescope returned the first tentative indications of water in the atmosphere of another exoplanet in the constellation Pegasus.
Dr. Udry said he and Dr. Sasselov would be observing the Gliese system with a Canadian space telescope named Most, to see if there are any dips in starlight caused by the new planet. Failing that, they said, the best chance for more information about the Gliese system lies with NASA’s Terrestrial Planet Finder and the European Space Agency’s Darwin missions, which are designed to study Earth-like planets, but have been delayed by political, technical and financial difficulties.
“We are starting to count the first targets,” Dr. Udry said.