Coming soon: home test kits as simple and cheap as a pregnancy-test dipstick. Then will come dipsticks for the genes that control hormone levels, brain chemistry, nerve functions and metabolic rates–which, in turn, affect stress, pleasure, irritability, aggression, impulsive behavior, suicidal tendencies, alcoholism and sexual proclivities. And then, finally, the dipstick that reveals all. And Google wants to be in the middle of all this. 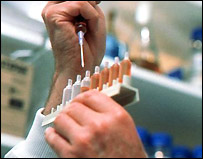