Chips could run faster and be more energy efficient thanks to a process from IBM that copies nature’s creation of seashells and snowflakes. The process, called airgap, enables trillions of microscopic vacuum holes to be placed between the copper wire in chips to act as an insulator. 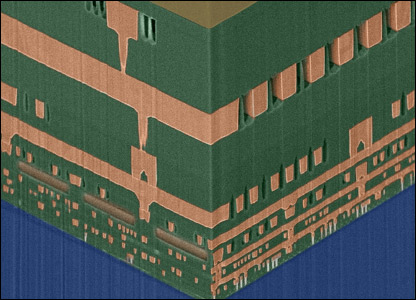 This microprocessor cross-section shows empty space in between the chip’s wiring. Wires are usually insulated with a glass-like material. The vacuum holes are a much better insulator.

It solves the problem of electrical energy leaking between wires, which creates unwanted heat.
IBM says the chips will run 35% faster and consume 15% less energy.
The company has developed a method of controlling the interaction between self-assembling molecules, called diblock copolymers, to create the vacuum holes.
Mr Edlestein, IBM Fellow and chief scientist of the self-assembly airgap project, said: "We have managed to harness the kinds of processes we see in nature to make regular patterns – such as the layers of enamel on your teeth, or the shape of a seashell if you look under a microscope.

"In this case we choose molecules that have a certain shape and certain molecular forces between them, and when they are mixed properly and baked they naturally on their own behaviour assemble themselves into regular arrays of certain patterns."

While the self-assembled polymers were developed back in 2001, it is the first time anyone has been able to produce mass quantities and integrate them into a manufacturing process with high yields.
Dr Douglas Paul, senior research associate at Cambridge University, said: "The big breakthrough is getting it into a manufacturing process and producing 300mm diameter wafers with the process working.
"This is never easy as the yields need to be near perfect for every single process stage and there are hundreds in a full wafer to get circuits to operate with the billion transistors or so now in production."
The controlled interaction between the molecules creates a series of evenly-spaced dots – each one only 20-nanometres in diameter. One nanometre is about a million times smaller than the size of a pinhead.
Those dots are then etched away in a chemical process, forming holes, which are then capped to create a vacuum.
For years, chip makers have used insulators such as the oxidised form of silicon, called silicon dioxide. While effective, silicon dioxide cannot match the insulating properties of a vacuum.
The new chips will be used initially in IBM’s server machines – used by businesses and research groups – and the process will then be rolled out to the firm’s semiconductor partners.
Dr Paul said IBM’s claims of a 35% speed increase was "quite a significant jump in performance just by changing one process in the fabrication of the chips".
He added: "IBM will have test circuits to allow the performance to be measured but they haven’t stated what the detailed performance they have got on their research website yet.
"As they state, they expect it to be in chips in 2009; it still has a bit of work to go."