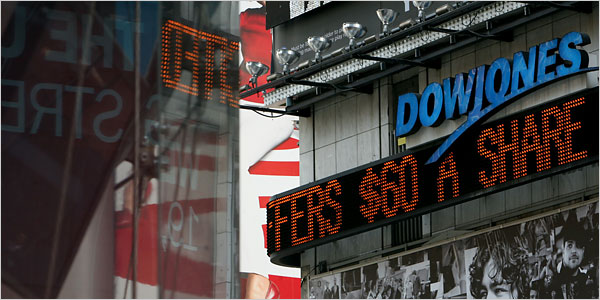 The Dow (up 23.24 to 13,264.62, Charts), in its fourth record close in a row, ended up about 0.2 percent. The blue-chip leader also set a new intraday high of 13,284.53.
The Dow has now risen in 23 of the last 26 sessions, marking its longest bull run since the summer of 1927, when the indicator ended higher in 24 of 27 sessions, according to Dow Jones.
The broader S&P 500 (up 3.23 to 1,505.62, Charts) index also rose about 0.2 percent after ending the previous session above 1,500 for the first time since the third quarter of 2000. The S&P 500 is not far from its all-time high of 1527.46 hit in March 2000 at the tail end of the 1990s tech-boom-fueled bull run.
The tech-heavy Nasdaq composite (up 6.69 to 2,572.15, Charts) ended up about 0.4 percent, at a six-year high.
Oil fell more than a dollar, while bonds and the dollar gained.
For the week, the Dow is up about 1.1 percent, while the Nasdaq gained 0.6 percent and the S&P about 0.8 percent.
Next week traders will look forward to the Federal Reserve’s policy statement, a report on retail sales and wholesale inflation figures.
The Fed’s policy statement is expected to be the most closely watched item, according to Michael Parness, head of the trading and research firm Trendfund.com.
Parness said retail sales have been disappointing lately but still may not drag down stocks.
"When you have a bull market mentality, people will look at soft sales as an indication the Fed will lower rates," he said.
Also on tap next week: earnings from Cisco Systems (Charts, Fortune 500) and Walt Disney (Charts, Fortune 500) Tuesday after the bell, News Corp (Charts, Fortune 500). Wednesday morning, Viacom Thursday morning and American International Group Thursday after the bell.
Here’s what moved the markets Friday:
Stocks rose in the morning, extending the recent rally as investors welcomed the April jobs report, lower oil prices and talk of a Microsoft-Yahoo merger. But after pushing the major gauges to the new highs, investors backed off a bit, and stocks traded near even until late in the day.
"I think people are thinking it’s the weekend, and there’s a lot of money that’s been made recently," said Parness. "But I’m certainly not going to call tops here."
The run has reflected stronger than expected first-quarter earnings, the spate of mergers and other deals news and economic news that suggests that growth is slowing at a moderate pace and that inflation is moderating.
"It’s pretty much playing out according to the plan that [Fed Chairman] Bernanke laid out for a soft landing," said Douglas Roberts, managing principal at Channel Capital Research.
The jobs report Friday seemed to support the so-called soft landing scenario, Roberts added.
Employers added 88,000 jobs in April, the smallest monthly number in more than two years and short of forecasts for 100,000 jobs added. Employers added an upwardly revised 177,000 jobs in March.
The unemployment rate, generated by a separate survey, rose to 4.5 percent from 4.4 percent, as expected.
Average hourly earnings, the report’s inflation component, rose a smaller than expected 0.2 percent after rising 0.3 percent in March.
Taken as a whole, the report seemed to suggest growth is slowing enough to take the edge off inflationary pressures but not so much as to drive the economy into a recession, all of which raised bets that the Federal Reserve might cut interest rates later this year.
Fed policy-makers are meeting next week and are expected to hold rates steady at 5.25 percent for the seventh meeting in a row.