The One Laptop Per Child project became a reality Thursday in Uruguay, as the 160 children of school number 24 in the humble town of Cardal received their XO computers. The learning tools came directly from the hands of president Tabaré Vazquez. It has become a matter of national pride that Uruguay is the first country to realize the project’s goal. 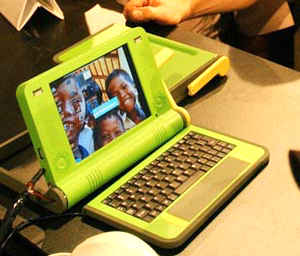 The target is that by 2009, every school-age child in Uruguay will have one, and an initial 15 million dollars have already been allocated to the project. From the newspaper articles: ‘The happiness of having a PC in their hands, some of them for the first time, had the kids in ecstasy, which didn’t wait to turn on their computers, introduce their personal information (required the first time they’re turned on), choose the screen colors, and start experimenting with them. What initially made them more enthusiastic was the possibility of taking photographs and filming each others with the included webcams.’" More information below.

According to the unofficial blog of the Uruguayan project, named proyecto Ceibal, the infrastructure for wireless is not yet in place but will be provided in the next few days by the national telco ANTEL. No photos of the event have been posted online, but you can see an institutional video on Youtube. One interesting point is that it has not yet been decided that the XO will be the laptop of choice for the entire project. Two other companies want to be considered: Intel, with their Classmate PC, and Israeli-manufactured ITP-C. In a press conference, Intel manager for the southern cone Esteban Galluzzi went as far as to compare the XO to a Pentium II, and stressed that the Classmate is able to run Windows XP. As advisor and local guru Juan Grompone stated, ‘who will ultimately benefit from this is education?’ This will be an interesting test to see if the OLPC project meets its intended goals of ‘learning learning’. Let’s hope this project is the means that will foster among some of the children the desire to learn and to tinker."

Via the Obserer – Sorry this link is not in English