Imagine being able to rapidly identify tiny biological molecules such as DNA and toxins using less than a drop of salt water in a system that can fit on a microchip. 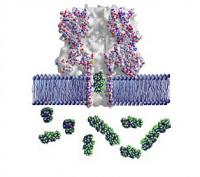 Graphic showing a lipid bilayer membrane (blue) with an alpha-hemolysin nanopore. A polyethylene glycol molecule (green globular structure) is transiting the pore; others are in solution on one side of the membrane. The colored spheres represent individual atoms, and are approximately 0.5 nanometers in diameter, or one twenty-thousandth the width of a human hair. Credit: NIST


It’s closer than you might believe, say a team of researchers at the National Institute of Standards and Technology (NIST), Brazil’s Universidade Federal de Pernambuco, and Wright State University in Dayton, Ohio.

Imagine being able to rapidly identify tiny biological molecules such as DNA and toxins using less than a drop of salt water in a system that can fit on a microchip. It’s closer than you might believe, say a team of researchers at the National Institute of Standards and Technology (NIST), Brazil’s Universidade Federal de Pernambuco, and Wright State University in Dayton, Ohio.

In a paper appearing next week in the Proceedings of the National Academy of Sciences,* the team proves for the first time that a single nanometer-scale pore in a thin membrane can be used to accurately detect and sort different-sized polymer chains (a model for biomolecules) that pass through or block the channel.
Traditionally, unknown molecules are measured and identified using mass spectrometry, a process that involves ionizing and disintegrating large numbers of a target molecule, then analyzing the masses of the resulting molecules to produce a "molecular fingerprint" for the original sample. This equipment can cover a good-sized desk. By contrast, the "single-molecule mass spectrometry" system described in the PNAS paper is a non-destructive technique that in principle can measure one molecule at a time in a space small enough to fit on a single microchip device.
The technique involves creating a lipid bilayer membrane similar to those in living cells, and "drilling" a pore in it with a protein (alpha-hemolysin) produced by the Staphyloccoccus aureus bacteria specifically to penetrate cell membranes. Charged molecules (such as single-stranded DNA) are forced one-at-a-time into the nanopore, which is only 1.5 nanometers (the diameter of a human hair is about 10,000 nanometers) at its smallest point, by an applied electric current. As the molecules pass through the channel, the current flow is reduced in proportion to the size of each individual chain, allowing its mass to be easily derived.
In this experiment, various-sized chains in solution of the uncharged polymer polyethylene glycol (PEG) were substituted for biomolecules. Each type of PEG molecule reduced the nanopore’s electrical conductance differently as it moved through, allowing the researchers to distinguish one size of PEG chain from another.
As a control, a solution of a highly purified PEG of a specific size was characterized with the nanopore. The resulting "fingerprint" closely matched the one identifying samples of the same size polymer in the mixed chain solution.
Further enhancement of the data from both the experimental and control tests yielded mass measurements and identifications of the different PEG chains that correlate with those made by traditional mass spectrometry.
Because the dimensions of the lipid bilayer and the alpha-hemolysin pore, as well as the required amount of electrical current, are at the nanoscale level, the "single-molecule mass spectrometry" technology may one day be incorporated into "lab-on-a-chip" molecular analyzers and single-strand DNA sequencers.