A bee-keeper in Quanzhou, Fujian, risked his life by having 120,000 bees crawling all over his body on Monday, becoming the first person in the province to successfully achieve the feat 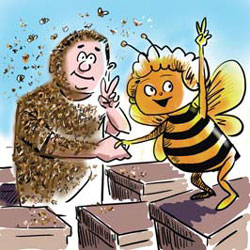 Huang Yuannong, first placed two queen bees on his chest and told his assistant to empty boxes of bees on him. Within 30 minutes, he was covered by 120,000 bees. From a distance it looked as though he was wearing a yellow sweater. Last year, Huang performed the same feat by having 20,000 bees settle on his face. He said his next attempt would be a Guinness record of 200,000 bees.