A Cornish man says he has broken the world record for sleep deprivation by staying awake for 11 days and nights. 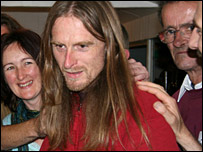 Tony Wright, 42, from Penzance, was trying to beat the Guinness world record of 264 sleepless hours set by Randy Gardner in the US in 1964.
He fought off tiredness by drinking tea, playing pool and keeping a diary.
The Guinness Book of Records has since withdrawn its backing of a sleep deprivation class because of the associated health risks.
Hardest part
Weary Mr Wright told BBC News: "I feel pretty good, It’s been a bit of a slog, but I got there."
He said that his ‘Stone Age’ diet of raw food helped parts of his brain to stay awake and remain functional for long periods.
He said: "It makes it much easier to switch from one side of the brain which is really tired, to the other.
"But both are pretty tired at the moment."
During the record attempt, Mr Wright noticed his speech becoming incomprehensible at times and colours appearing very bright.
A webcam and CCTV cameras monitored him 24-hours a day.
The attempt was part of Mr Wright’s research into the body’s relationship to sleep.
He argues that parts of the human brain require a different amount of sleep and it is possible to stay awake and remain functional for long periods.
He said the hardest part was staying in one place – Penzance’s Studio Bar – in order to prove that he was not popping out for a sleep.
He set out to keep a full video record of the entire 11 days as proof he stayed awake.