The Bancroft family, controlling shareholders of Dow Jones & Co. Inc., are set to submit a new set of proposals to News Corp. on how to protect the Wall Street Journal’s editorial independence, the Journal reported Monday. 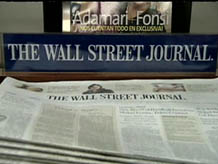 The Bancroft family, controlling shareholders of Dow Jones & Co. Inc., are set to submit a new set of proposals to News Corp. on how to protect the Wall Street Journal’s editorial independence, the Journal reported Monday.

News Corp has offered $5 billion to buy Dow Jones, but the Bancrofts have voiced concern that Chairman Rupert Murdoch could have too much influence over the company’s flagship Wall Street Journal.
The Journal in its online edition cited people familiar with the matter as saying that Bancroft family advisers could send News Corp. a new proposal regarding a special board to safeguard the paper as early as Tuesday.
The newspaper said it was unclear if the changes would bridge differences over how to enforce rules designed to protect the Journal’s independence.
The newspaper reported that the Bancrofts are only willing to continue talks with News Corp. if an agreement over safeguarding the Journal can be reached.
It said the Bancroft family wants to include enforcement clauses in any agreement and ensure that the newsroom of the Journal has strong representation on the special board.
The family has talked about creating a method in which the board would have a public way to air disagreements with News Corp., the paper said, citing a person familiar with the family’s discussion.
The board would also have the power to hire and fire the managing editor of the Journal, this person said, according to the newspaper’s report.
In a separate article on the Journal’s Web site, the paper reported that Robert Thomson, editor of News Corp.’s Times of London newspaper, has discussed with Murdoch News Corp.’s strategy for Dow Jones.
Thomson has made several recommendations to Murdoch. They include investing more money in Dow Jones’ online assets such as WSJ.com and Marketwatch.com, as well as considering charging different prices for access to the company’s Web sites, depending on the amount of information readers want, the Journal reported, citing a person familiar with his thinking.
Multiple members of the Bancroft family did not return telephone calls seeking comment. A spokesman for the family and officials from Dow Jones and News Corp. were not immediately available for comment.
Dow Jones announced late Monday that advertising revenue at the Journal fell in May, reflecting an ongoing slump in U.S. newspaper ad sales.
Shares of Dow Jones fell 21 cents to close at $60.21 on the New York Stock Exchange, still above Murdoch’s offer of $60 per share, which Dow Jones disclosed in May.