Cameras instead of rear-view mirrors? Fingerprint recognition for ignition control? A removable, computerized dashboard with wireless connectivity? Sounds like mission prep for 007 at Q’s lab. 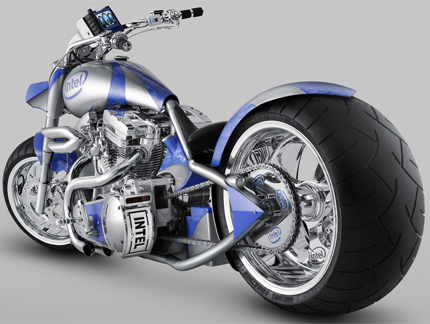 After 30 years of leading silicon innovations, it isn’t too far-fetched to consider Intel as the company behind such Bond-worthy gadgetry. But who would have thought Intel would celebrate those three decades of achievement by pairing up with the infamous gang at Orange County Choppers to create a custom-made, computer-based chopper? Not us. But we sure dig it.
The 250-hp bike has dual V-twin engines. And that’s fierce enough on it’s own. But when you add a computer to manage the beast—and fully embedded quad-core processors at that—it becomes a real tech powerhouse.
This might be the world’s first fully computerized chopper. The finished, fully operational concept bike has more tricks in its bag than Houdini. For starters, there’s no ignition key: The motorcycle’s 3-pound, 5.6-in. LCD screen (pictured below at right) recognizes a fingerprint to de-activate security functions and allow access to the “start ignition” button. Fully viewable in sunlight, the touchscreen dash comes complete with a digital speedometer, tachometer, voltage meter, battery voltage gauges and turn-signal indicators. And it displays rear-view images that come from the rear-mounted cameras—completely replacing the need for mirrors. Let’s not forget the electronically controlled, hydraulic kickstand. They weren’t kidding when they said everything on the bike is integrated with a computing system. “We have created the most powerful and technologically advanced bike we’ve ever made,” Orange County choppers founder Paul Teutul Sr. says.
What’s more impressive is that the digital dashboard goes above and beyond the simple functionalities of driving the chopper: It’s also a fully capable PC, suited up with Wi-Fi, Bluetooth, GPS, USB drives, a QWERTY keyboard and all Windows applications. So it can download music, videos and pictures, make presentations, check (and respond to) e-mail, give directions and so forth. Plus, the fact that the computerized contraption is removable for convenience and security is a nice accomplice to the wireless component—making curbside Web browsing a realistic option. The battery, which recharges while the bike is operating, allows for a fully-charged mobile PC whenever it’s detached from the vehicle. And while the five-hour run time is not too shabby (hey, that was the iPhone’s life span until yesterday), the system also has a wall-charge unit for those extended rest stops.
But remember, the whole device comes embedded on a motorcycle—so it had to be designed to protect against moisture, dirt, shock, vibration and extreme temperatures. The computer, then, is encased in a magnesium housing, reinforced with rubber isolators, making it one of the most hardcore handheld mobile PCs we’ve seen in a while.