Roboticists are using the lessons of a 1930s human physiologist to build the world’s fastest walking robot. RunBot is a self-learning, dynamic robot, which has been built around the theories of Nikolai Bernstein. 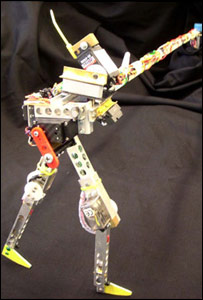 Runbot can adapt to changes in the terrain
"Getting a robot to walk like a human requires a dynamic machine," said Professor Florentin Woergoetter.
RunBot is a small, biped robot which can move at speeds of more than three leg lengths per second, slightly slower than the fastest walking human.
Bernstein said that animal movement was not under the total control of the brain but rather, "local circuits" did most of the command and control work.
The brain was involved in the process of walking, he said, only when the understood parameters were altered, such as moving from one type of terrain to another, or dealing with uneven surfaces.
The basic walking steps of RunBot, which has been built by scientists co-operating across Europe, are controlled by reflex information received by peripheral sensors on the joints and feet of the robot, as well as an accelerometer which monitors the pitch of the machine.
These sensors pass data on to local neural loops – the equivalent of local circuits – which analyse the information and make adjustments to the gait of the robot in real time.

How does RunBot walk?
Information from sensors is constantly created by the interaction of the robot with the terrain so that RunBot can adjust its step if there is a change in the environment.
As the robot takes each step, control circuits ensure that the joints are not overstretched and that the next step begins.
But if the robot encounters an obstacle, or a dramatic change in the terrain, such as a slope, then the higher level functions of the robot – the learning circuitries – are used.
The latest findings of the robot research study are presented in the Public Library of Science Computational Biology journal.
Four other scientists – Poramate Manoonpong, Tao Geng, Tomas Kulvicius and Bernd Porr – are also involved in the project, which has been running for the last four years.
Professor Woergoetter, of the University of Gottingen, in Germany, said: "When RunBot first encounters a slope these low level control circuits ‘believe’ they can continue to walk up the slope without having to change anything.
"But this is misguided and as a consequence the machine falls backwards. This triggers the other sensors and the highest loop we have built into RunBot – the learning circuitry – and from that experience of falling the machine knows that something needs to be changed."
Dynamic process
He said human walking was a dynamic process.
"About half of the time during a gait cycle we are not doing anything, just falling forward. We are propelling ourselves over and over again – like releasing a spring.
"In a robot, the difficulty lies in releasing the spring-like movement at the right moment in time – calculated in milliseconds – and to get the dampening right so that the robot does not fall forward and crash.
"These parameters are very difficult to handle," he said.
RunBot walks in a very different way from robots like Asimo, star of the Honda TV adverts, said Prof Woergoetter.
"They are kinematic walkers – they walk step by step and calculate every single angle, every millisecond.
"That can be handled through engineering but it is very clumsy. No human would walk like that. All these big machines stomp around like robots – we want our robot to walk like a human."
The first step in building RunBot was creating a biomechanical frame that could support passive walking patterns.
Passive walkers can walk down a slope unaided, propelled by gravity and kept upright and moving through the correct mechanical physiology.
Prof Woergoetter said: "Passive walking looks pretty realistic – but that’s level one. On top of this we have local circuits, nested neural loops, which operate between the muscles (the joints of the robot) and the spinal cord (the spinal reflex of RunBot)."
He said RunBot learned from its mistakes, much in the same way as a human baby.
"Babies use a lot of their brains to train local circuits but once they are trained they are fairly autonomous.
"Only when it comes to more difficult things – such as a change of terrain – that’s when the brain steps in and says ‘now we are moving from ice to sand and I have to change something’.
"This is a good model because you are easing the load of control – if your brain had to think all the time about walking, it’s doubtful you could have a conversation at the same time."
Nervous system
The principle was first discussed in the human nervous system by Russian physiologist Nikolai Bernstein.
Prof Woergoetter said: "He said it made sense that local agents, local networks, do the basic job, but the brain exerted control whenever necessary."
So using the information from its local circuits RunBot can walk on flat surfaces at speeds of more than three leg lengths per second.
Prof Woergoetter said RunBot was able to learn new walking patterns after only a few trials.
"If walking uphill, the gait becomes shorter, the robot’s upper body weight shifts forward," he said.
The key lesson from the study, he said, was that the nested loop design first proposed by Bernstein more than 70 years ago "worked and was efficient".
He said the challenge was now to make RunBot bigger, more adaptive and to better anticipate situations like change of terrain.