Never one to keep his opinions to himself, the Rocket Man has waded into cyberspace with all guns blazing. 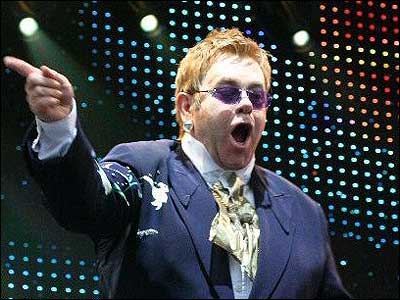 He claims it is destroying good music, saying: “The internet has stopped people from going out and being with each other, creating stuff.
“Instead they sit at home and make their own records, which is sometimes OK but it doesn’t bode well for long-term artistic vision.
“It’s just a means to an end.
“We’re talking about things that are going to change the world and change the way people listen to music and that’s not going to happen with people blogging on the internet.
“I mean, get out there — communicate.
“Hopefully the next movement in music will tear down the internet.
“Let’s get out in the streets and march and protest instead of sitting at home and blogging.
“I do think it would be an incredible experiment to shut down the whole internet for five years and see what sort of art is produced over that span.
“There’s too much technology available.
“I’m sure, as far as music goes, it would be much more interesting than it is today.”
Multi-millionaire Elton, who turned 60 earlier this year, has admitted in the past that he is a bit behind the times. The Grammy award-winner was once quoted as saying: “I am the biggest technophobe of all time.
“I don’t have a mobile phone or an iPod or anything.
“I am such a Luddite when it comes to making music. All I can do is write at the piano.”
Sales of Elton’s last album The Captain & The Kid were disappointing — it barely shifted 100,000 copies. And in the past Sir Elt has opposed illegal downloading of his music from the net.
But the flamboyant singer has embraced the web in other ways.
The 60th birthday concert Sir Elton played to a 20,000-strong crowd at New York’s Madison Square Garden was streamed live over the internet.
The singer also announced earlier this year that his entire back catalogue of albums would be made available for digital download.
The internet has played a huge role in kick-starting the careers of some of Britain’s best new talent.
Sandi Thom shot to fame after broadcasting webcam concerts from her London basement flat, while both the Arctic Monkeys and Lily Allen acknowledge the part played by the web in their success.
But Elton also complained about the quality of music being released.
He said: “In the early Seventies there were at least ten albums released every week that were fantastic.
“Now you’re lucky to find ten albums a year of that quality.
“And there are more albums released each week now than there were then.”