The seventh season of "24" will take steps to reduce and offset the carbon emissions from the show’s production, with the goal of having the season finale be entirely carbon-neutral. 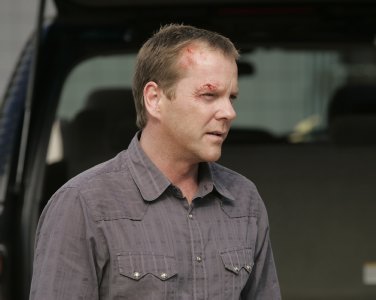 It may sound like a publicity stunt, but Fox spokesman Chris Anderson says the network isn’t after bigger ratings. "We are publicizing ’24’s’ commitment to climate change for two reasons and two reasons only: to inspire the public to take global warming seriously and hopefully to motivate other studios to make changes to their production practices as well," he says.

After all, shooting on soundstages requires energy-hungry lighting and gear, and going on location means using portable generators and driving trucks, vans and cars loaded with equipment, costumes and people. When production on Season 7 begins this month, the show’s 26 diesel vehicles and five generators will run on a more planet-friendly biodiesel blend, which will start at 5 percent biodiesel and gradually increase, barring any problems, according to executive producer Howard Gordon.
The show’s electricity bills will go toward renewable-energy credits that will bring a share of wind, solar and water power to Los Angeles’s grid. A diesel-powered soundstage will be converted to electricity, thus lessening the show’s contribution to the local air pollution problem, and the show’s five location scouts will be given Priuses to drive. Scripts, schedules and memos — which used to be hand-delivered by car — will be sent via e-mail.
The "24" page at Fox.com now features energy conservation tips and a public service announcement about global warming featuring Kiefer Sutherland; more information will be posted when the show airs in January. Plus, climate change will be incorporated into the series’ plot (which just might scare some viewers into taking action).
The extent to which the plan will reduce the show’s imprint on Earth is difficult to calculate, but the measures certainly won’t hurt; more shows and films aiming to reduce their carbon footprints could have a considerable impact. Some productions before "24" were green — films such as "Syriana" and "An Inconvenient Truth" were carbon-neutral, as was Comedy Central’s recent roast of Flavor Flav. But "24’s" weekly visibility might spark a domino effect — in Hollywood, Bollywood and beyond.