An expert chocolate-maker has resigned after he was caught squashing truffles at a rival manufacturer’s shop. 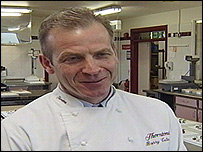 Barry Colenso, former top chocolate-maker at Derbyshire-based Thorntons, damaged the truffles at Hotel Chocolat in Nottingham.
The store manager said staff found £63.50 worth of truffles damaged. The firm decided to take no further action.
Thorntons has declined to comment on the situation, but issued a statement saying Mr Colenso had resigned.
‘Squashed truffles’
Mr Colenso, who designed a giant 390kg (860lb) edible chocolate billboard last Easter, has also not been available for comment.
Thorntons is currently in the process of recruiting his replacement.
Lynn Cunningham from Hotel Chocolat said: "It was quite extraordinary really.
"The staff observed Mr Colenso handling a number of truffles in a way that made them suspicious.
"When we checked the truffles later they had been squashed and damaged."
She said Hotel Chocolat was told by Thorntons that Mr Colenso had "handled the truffles inappropriately".
"We just want to move on now," she said.