The TV ads show women shaking their little finger – a gesture used to symbolise a small penis – as speeding male motorists race past. 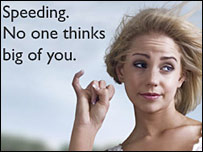 In a government-commissioned survey, about 60% of young men said the ad had made them ponder their driving habits.
The ads have attracted complaints of sexism since they began in June.
But New South Wales (NSW) Roads Minister Eric Roozendaal said a few dented egos was a small price to pay if the adds help save a life.
"Wiggling your pinkie has cut through to that crucial age group of young drivers – they’re using it as a way to slow their mates down and stop them acting recklessly on our roads," he told the Sydney Morning Herald newspaper.
The A$1.9m (£805,000) campaign "Speeding. No-one thinks big of you" has been running on TV, in cinemas, at bus shelters and online since June.
The NSW Roads and Traffic Authority (RTA) said it introduced the campaign because the shock tactics of previous adverts, showing disturbing images of death and injury in road crashes, had not worked.
The new ads included one young driver revving his engine and rushing through traffic lights in front of two young women and another racing past a female pedestrian.
After both incidents the women wave their little fingers in slow motion with knowing glances.
Speeding is a factor in about 40% of road deaths in NSW each year, according to RTA figures.
The ad campaign was introduced at the same time as restrictions on learner drivers – including a ban on all mobile phone use, limits on the number of young passengers allowed and tougher speeding penalties.