The race to create life version 2.0 is under way.

Genes of micro-organisms are being modified to create something new
And rumours abound that closest to the finish line in constructing a lifeform in the laboratory is US genome-entrepreneur Craig Venter’s research team.
The J Craig Venter Institute scientists are aiming to craft a "minimal genome"- the smallest group of genes an organism needs to survive and function – and insert it into an empty cell.
This stripped-down genome has been established with the help of a simple bacterium, Mycoplasma genitalium, by knocking out its genes, one by one, until only the genetic material vital for survival was found.
The plan is to re-synthesise these DNA sequences from simple chemicals, stitch them together and create an artificial organism. Some believe the team may be on the cusp of doing just that.
Dr Venter’s work on synthetic life is described by some as "top-down", meaning that he is taking an existing organism and changing it to create something new.
Drew Endy from the Massachusetts Institute of Technology, US, says: "Venter is not creating life from scratch.
"He is constructing a genome, which is more or less a slightly modified copy of an existing genome, then putting it back into an existing cell."
Dr Endy, who is working on standard building blocks, called BioBrick parts, which can be assembled to build larger biological systems, says he sees Dr Venter’s work as a "genome construction project", albeit "an incredibly significant" one. 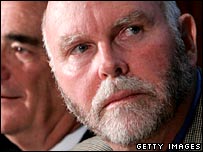 Dr Venter could be on the cusp of creating life

But building life from scratch, from the "bottom-up", is a challenge that some synthetic biologists have decided to take on.

If you can build the biological parts, they argue, then creating something that meets the criteria for life – has a metabolism, replicates and evolves – is surely the next step.
Cell ‘blueprint’
Anthony Forster from Vanderbilt University Medical Center, Tennessee, US, says: "There has been a fair amount of talk about how you might synthesise self replication and life in a test tube, but nobody really had a detailed plan for it."
Dr Forster, along with George Church from Harvard Medical School, US, has created a "blueprint" for a synthetic cell, defining the 151 genes that they believe are needed to create life.
The team is now in the process of using the blueprint to begin to piece together its prototype cell.
But what are the reasons for creating synthetic life?
Dr Venter hopes to modify genes in his new organism so that it can mop up greenhouse gases. Other tasks such organisms might be able to do include cleaning up oil spills or producing plastics.
Giovanni Murtas, from the Enrico Fermi Centre, University of Rome Three, Italy, plans to build a new lifeform to look at the more fundamental question of the origins of life.
"We are creating these semi-synthetic minimal cells that recall the early living cells," he says.
So far, his team has successfully built a cell system that can synthesise proteins, which is important for demonstrating that a basic metabolism can be created. Replication is the next step, he explains.
"If you want to understand more about how life was set up, then you want to recreate the principal steps for life; and you can obviously learn something new about life from using this approach," Dr Murtas tells BBC News.
Ron Weiss from Princeton University, US, who is focussing on programming biological organisms, believes the technology could also have biomedical applications.
"One thing people are trying to do is to use cells as factories to make drugs or fabricate structures," he says.
New take on life
The top-down and bottom-up teams have something in common: they are mimicking what nature does already. Some scientists, though, have gone back to the drawing broad in their quest to produce synthetic life.
Steen Rasmussen from Los Alamos National Laboratory, US, is one of them.
"We are the radical kids on the block. We have abandoned so much of what traditional biology is doing. Many biologists view us as heretics," he says
Rather than turning to biological cell design as his starting point, Dr Rasmussen is looking to see if there might be simpler structures that he can use as the basis of his synthetic organism.
He is creating a cell in which the essential parts, such as genes and metabolic chemicals, are stuck to the surface of it rather than held inside like a traditional cell.
He says: "This means you can exchange resources and waste directly with the environment and that simplifies things enormously." 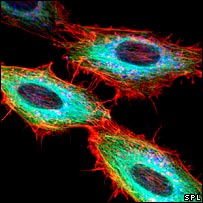 Some are moving away from traditional cell structures

Synthetic biologists think that although life created by a top-down approach may be imminent, synthetic life built from the bottom up is a few more years away – at least five to 10.

However, George Atwell from Southampton University, UK, adds a word or two of caution.
"The biggest challenge is not necessarily creating life, but knowing that you have created life – doing the experiment that unambiguously tells you that you’ve got it," he says.
"That’s because you are going to be looking at a ‘soup’ that contains several hundred, possibly several thousand, chemical species. How on Earth can you tell that what you have isn’t just a chemical waste bottle but something that is exhibiting the signs of life?"