Skip to content
Health & Fitness
Scientists say they have developed a safe method to administer the toxic gas carbon monoxide (CO) in a way that could help organ transplant patients. 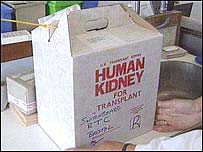 Although too much of the gas is deadly, minute doses help widen blood vessels and cut inflammation, which could boost the survival chances of donor organs.

Sheffield University scientists have devised a way to release targeted small doses of CO using carrier molecules.
They say lab tests have been promising and hope to start human trials by 2010.
The team is lead by Professor Brian Mann, who is working alongside Dr Roberto Motterlini at Northwick Park Institute for Medical Research.
They claim their discovery could have other applications too, including treating inflammatory diseases such as rheumatoid arthritis and high blood pressure in the lungs.
Injection
Conventional CO inhalation carries the risk of patients or medical staff being accidentally exposed to high doses.
The new treatment method should remove this risk, says Professor Mann.
It comprises water-soluble molecules, known as CO-releasing molecules (CO-RMs), which, when swallowed or injected, release calculated doses of CO inside the body.
Professor Mann said: "The molecules dissolve in water, so they can be made available in an easy-to-ingest, liquid form that quickly passes into the bloodstream.
"They can be injected exactly where required without being a threat. It’s a much safer way to give CO."
He added: "As well as making it simple to control how much CO is introduced into a patient’s body, it will be possible to refine the design of the molecules so that they target a particular place while leaving the rest of the body unaffected.
"For transplant patients, we could treat the donor organ to minimise the risk of damage and rejection."
He said CO was great at protecting against reperfusion damage – tissue damage caused when blood supply returns after a period of no supply.
Dr Ian Fairlamb, a chemist at the University of York, said many scientists were now looking at developing CO-RMs on the back of Dr Motterlini’s pioneering work.
"At first it may seem surprising that CO can be beneficial because it is a known toxin. But low doses of CO can elicit a wide range of biological effects, which can be exploited in many therapeutic applications.
"In terms of using carbon monoxide as a therapeutic agent, it is preferable to avoid using it in its gaseous form. These carrier compounds can transport it in a safe way."