The placenta acts like a parasite to avoid attack by a mother’s immune system, researchers have discovered. 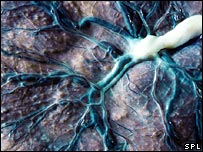 A University of Reading team found it employs a cloaking device very similar to that used by parasitic worms.
They hope the finding will aid a greater understanding of recurrent miscarriages, and the potentially dangerous condition pre-eclampsia.
Mimicking this method of avoiding immune rejection may also provide ways to tackle conditions like arthritis.
The placenta plays a vital role in pregnancy, acting as a link between the mother and foetus and providing it with essential nutrients.
However, as both the placenta and foetus have a different genetic make-up from the mother, in theory they are at risk of attack from her immune system.
The researchers already knew that the placenta secreted a small protein – neurokinin B (NKB) – which is found in significantly higher levels in mothers when pre-eclampsia develops.
NKB can be detected as early as week nine of pregnancy, and so can be used to spot women who are at risk.
Surprising discovery
The Reading team, funded by the Medical Research Council, were looking to translate this discovery into a diagnostic kit.
However, they found that the placental form of the protein did not react in the same way as the form they had been using in the laboratory.
It was clear that a modification was occurring during the synthesis of the protein by the placenta.
Further investigation revealed that placental NKB contained the molecule phosphocholine, which is used by the parasitic nematode worm to avoid attack by the immune system of the host in which it lives.
Lead researcher Professor Phil Lowry said: "When we saw this, our immediate instinct was to look at other proteins in the placenta.
"So far, from what we have seen, it appears a large number of them possess this protein surface molecule which cloaks them from the host immune system.
"Devising a mechanism by which you could make cells invisible to the immune system could lead to cures for a number of diseases and conditions."
Work has already started to test whether protein segments containing phosphocholine could help reverse conditions such as rheumatoid arthritis and other autoimmune disorders.
Professor James Walker, an expert in obstetrics and gynaecology at St James Hospital, Leeds, agreed the finding was potentially exciting.
He said: "The mother does not react to the placenta in the way you would expect her to, and we have been aware for a long time that the placenta appears to coat itself in some way.
"This finding potentially has a lot of implications for how the immune system can be modulated in various diseases, from cancer to arthritis, but there is still a lot of work to be done."