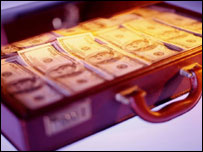 Security extras such as number fobs, card readers and password checks might make consumers more wary of net bank websites, they fear.
The warning comes as research shows how phishing gangs are targeting attempts to grab customer login details.
But the UK body overseeing net banking says figures show criminals are getting away with less from online accounts.
Security check
In a bid to beat the bad guys many banks have added extra security checks to the login name and password typically used to get access to an account.
Some, such as Lloyds, have trialled number generating key fobs and Barclays is trialling chip and pin card readers. Others have tried systems that check a customers PC and then ask that person to select which image they chose from a set they were shown previously.
But, said Garry Sidaway from ID and authentication firm Tricipher, all these checks could be making consumer more nervous about using online banking.
"The banks have to make this channel secure," he said, "but there is crumbling confidence in it."

Andrew Moloney, financial services market director for RSA Security, said banks were well aware that their efforts to shore up security around online banking could have a downside

"It registers as a concern," he said, "there could be too much security and there’s a danger of over-selling a new technology."
"This is not just about combating fraud," he added. "It’s about customer retention rates, user experience and customer satisfaction."
The misgivings about beefed up security around online banking come as the UK government’s Get Safe Online campaign issues a survey which shows the risks people are taking with login details.
These lax practices could prove costly as cyber fraudsters gradually shift their attention to Europe following moves in the US to combat phishing.
In late 2005 the US Federal Financial Institutions Examination Council (FFIEC) issued guidelines which forced banks to do more to protect online accounts.
Phishing statistics show a rapid move by the fraudsters to European banks and, said Mr Moloney, to smaller European banks using less protection.
Lists of phishing targets gathered by security companies show a huge shift away from big bank brands such as Citibank and Bank of America to Sparkasse, VolksBank and many others.
A spokeswoman for the Association for Payment and Clearing Services (Apacs) which oversees online banking said its figures showed that the message about safe banking was getting through.
Statistics released in October indicated that online banking fraud (including phishing) for the first six months of 2007 was down 67% over the previous year.
During the same time period the number of phishing attacks rose by 42%.
"The reason we are seeing that fall, despite the increase in phishing attacks, is because consumers are becoming more aware of how to protect themselves," said the spokeswoman.
"But," she added, "what we are still seeing happening is people falling foul of phishing attacks."
The spokeswoman urged people to be careful with login details to bank accounts and exercise caution when using e-mail and the web.