Prison officers at a high security jail housing dangerous criminals are wearing slippers as they patrol landings at night to avoid disturbing inmates. 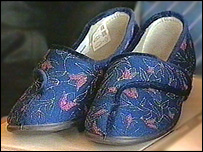 Officers at Wakefield’s maximum security prison are wearing soft-soled footwear after complaints from some prisoners at the building.
But a Prison Officers’ Association spokesman said the approach also had security benefits.
Glyn Travis said officers could patrol landings unheard by the inmates.
Mr Travis said the policy was fairly widespread across the country as the usual footwear made officers’ approaches to cells audible during the night.
He said: "In the majority of prisons officers wear soft shoes or slippers on nights.
"By midnight most prisoners should be asleep and we don’t want to disturb prisoners’ sleep."
Slate flooring
The policy of using soft-soled footwear on night shifts also reaps rewards for officers patrolling the landings.
"Walking around with soft shoes, the prisoners don’t know we’re there," said Mr Travis.
"We are always listening out for prisoners using drugs or being involved in other illegal activities during the night."
Mr Travis said many of the Victorian-built jails had slate flooring which was noisy as officers approached wearing boots.
He added: "As usual you get the same offenders who whinge for England about it."