Broadband industry leaders are to meet ministers to discuss how to stop the UK dropping into the internet "slow lane". 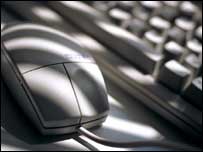 Ministers say broadband is not fast enough
More than half of all UK homes now have a broadband connection, at an average speed of four megabits a second (Mbps).
But the broadband summit will hear other countries are moving more quickly to build ultra-fast networks that can deliver speeds of as much as 100 Mbps.
Ministers say ultra-fast broadband will be a key to helping UK businesses "innovate, grow and create wealth".
Average speed
"We need to be discussing how we can put this new network into place, because delay could be a barrier to the future success of our economy," said Stephen Timms, minister for competitiveness.
The broadband summit will discuss how industry, government and regulators can make sure Britain gets the next-generation network that will be needed as services like internet video take off.
Copper lines
BT – Britain’s biggest broadband provider – has already warned that it may struggle to pay for an ultra-fast network.
But cable company Virgin says it will deliver 50 Mbps broadband by the end of next year – more than twice the maximum speed it currently offers.
Virgin’s 50 Mbps service will be available to more than 70% of the 12.5m homes its cable network covers by the end of 2008, the firm said.
The company is not digging up streets or laying new fibre to homes, but is installing new equipment at the hubs and bundling together spare channels on the line.
Most of Britain’s broadband access is delivered through existing copper telephone lines, which were never designed to deliver ultra-fast broadband.
BT is due to roll out ADSL2+ in the coming years but speeds will be limited to a maximum of 24 Mbps.
In the US, companies such as Verizon have invested billions of dollars in fibre to the home, providing hundreds of video channels and high-speed broadband.
BT is investing £10bn in speeding up the existing network, which includes some fibre, and will be able to deliver download speeds of 24 Mbps by 2011.