The Jackson Five are to reunite for a tour, with Michael Jackson set to take part, brother Jermaine has said. 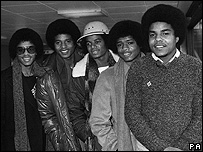 The band’s hits include ABC and I Want You Back

He told BBC 6 Music that concert dates have been discussed and could take place "sometime in 2008".
"Michael will be involved," the singer and guitarist confirmed. "We feel we have to do it one more time. We owe that to the fans and to the public. "
The group last toured as The Jacksons – with six members – in support of the Victory album in 1984.
Lead singer Michael, who had already released the million-selling Thriller album, was reportedly reluctant to go on the road with his brothers.
He told the audience on the last night of the tour that he was leaving the group.

Rumours of a reunion have circulated for years, and Jermaine confirmed that the project was delayed by Michael’s trial for child abuse in 2005.
"There’s been so much going on, getting over all the hurdles that we all were faced with during Michael’s trial," he said.
"But we are stronger than ever. I’m gonna say thank you, thank you, thank you so much to all the fans and the supporters of my family all over Europe, all over the UK especially, who came out to show their love and their support."
New material
Jermaine, who sang lead vocals for the band until his younger brother took over, added that Michael would definitely be part of the reunion.
"He has to be," he said. "He is a Jackson."
"He was at the meetings. Michael will be involved."
The star also hinted at new material, saying that the band was "in the studio at the moment".
The Jacksons – featuring brothers Tito, Marlon, Jackie, Jermaine, Michael and Randy, found fame in the 1970s with hits such as I Want You Back, ABC and Shake Your Body (Down To The Ground) and Can You Feel It.
Michael’s success eclipsed that of his brothers in the 1980s, while sister Janet also rose to prominence – racking up seven US top ten singles from her Rhythm Nation 1814 album.
In the UK, Jermaine Jackson was seen as a contestant on this year’s Celebrity Big Brother.