Whether it’s the tried-and-true Butterball, the more enigmatic Tofurkey or pricey "pastured" birds, turkey is simply what we eat for Thanksgiving. 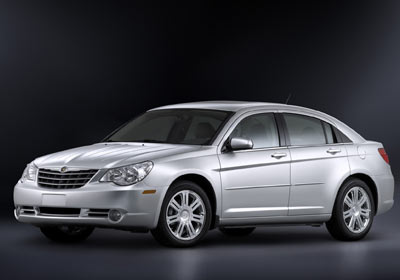 © Chrysler
But we’ve come to know another type of turkey–vehicles that, for some reason or another, have been problematic or simply haven’t found their place in the market. Most have make-or-break issues with shoppers: recalls, reliability, resale value and safety.
In compiling our fourth annual list of "Automotive Turkeys," we looked at four factors, all pertaining to 2007 model-year vehicles: number of recalls to date, according to the National Highway Traffic Safety Administration (NHTSA) database; reliability ratings from Consumer Reports; depreciation, in the form of Automotive Leasing Guide’s (ALG) star ratings; and safety, from NHTSA and Insurance Institute for Highway Safety (IIHS) crash-test ratings.
Besides a standout number of recalls, we looked specifically for below-average reliability, high depreciation and NHTSA ratings below four stars and/or IIHS results of "Marginal" or "Poor." Of the vehicles that met at least two of these qualifications, we also looked subjectively at other factors, such as fuel efficiency and cost.
All Recalls Are Not Alike

Safety recalls, which can be initiated either by automakers or by the federal government, are overseen by the National Highway Traffic Safety Administration (NHTSA). In either case, NHTSA monitors the recall process and maintains a database of pertinent recalls, accessible through its SaferCar.gov Web site.
In looking purely at the number of recalls by model for 2007, several Chrysler (including Dodge and Jeep) models stood out for having more than just a recall or two. CR’s Bartlett wasn’t willing to speculate about Chrysler having more recalls, but he said that automakers have been increasingly sharing powertrain and interior components across much of their vehicle lines, and if there are problems it can bring down the entire brand.
That looks to be the case for Chrysler, at least in two instances. A massive recall involving anti-lock braking system control modules affected 11 different Chrysler, Dodge and Jeep models, including the Chrysler Sebring, Dodge Caliber, Dodge Magnum, Dodge Nitro and Jeep Liberty, which were all on our turkeys list, while another recall concerning automatic-transmission control modules potentially affected eight different vehicles, including the Magnum, Nitro and Liberty.
Residual Value

Another factor that can or should be an indicator of a turkey is residual value. John Blair, CEO of Automotive Leasing Guide, which provides depreciation estimates for use in the automotive financing industry, says that residual value is commonly associated with leases–as a higher residual value typically translates to a lower monthly payment–but it’s actually more important to those who buy.
That’s because leases are for a set term at a monthly payment that’s set by the bank, "but buy the car and you’re stuck with it," says Blair. "It can be quite different when you’re comparing a Honda to a Hyundai."
For instance, Blair says that ALG’s three-year residual on a Honda Accord is about 55%–meaning that it is estimated to be worth about 55% of its original value after three years–while for a Hyundai Sonata, it’s only 40%, which translates to a difference in value of $3,750 over those three years on a sticker price of $25,000. Although Blair added that, generally speaking, vehicles with lower residuals have lower appeal and often have automaker incentives that apply to the purchase price, making up for some of that difference.
What’s more, the difference between vehicles can be even more pronounced than this example. On ALG’s five-star ratings system, with five-star vehicles having the best depreciation ratings, the Accord has a four-star rating, while the Sonata has two stars.
Staying Safe On The Road

Safety is another important consideration for shoppers, and if major crash-test results are any indication, there’s still a wide range of safety available to occupants, depending on the model.
"We’re consistently finding that safety is one of the top considerations as people shop for a new car," says Bartlett, who adds that the existing crashworthiness ratings are the best way to identify the safest vehicles.
U.S. shoppers have two different crash-test ratings sets to peruse, those run by NHTSA and those conducted by the Insurance Institute for Highway Safety (IIHS). Among new vehicles today, those with "Marginal" or "Poor" ratings from the IIHS or anything less than four stars on the federal five-star scale are standouts in a not-so-positive sense.
With criteria like this, it’s a lot easier to beware the turkeys. And for the record, founding father Ben Franklin, mostly a vegetarian who argued for the turkey as our national bird, would have probably gone for the Tofurkey.

It’s not shocking that most automakers reacted with surprise and some resistance to being included in our list of Automotive Turkeys.
Regarding the Ford Crown Victoria, spokesman Jim Cain says that it’s hardly fair to include a vehicle that’s no longer on sale to the public for 2008.
"The Crown Victoria is far from a turkey. It’s the preferred vehicle for police and taxi fleets across the country because it is affordable to purchase and operate, and because it is remarkably durable," says Cain. "In fact, our sales to police agencies are up this year, despite new competitors from Dodge and Chevy."
GM

On the Grand Prix‘s below-average resale value, GM spokeswoman Debbie Frakes says, "It is not uncommon for vehicles at the end of their lifecycle, like the Grand Prix, to experience lower residual values than when the vehicle was fresh on the market. In addition, GM is taking positive steps to improve residual values on all of our vehicles by reducing daily rental fleet sales and other activities that can negatively affect both wholesale and retail pricing."
And regarding the Chevrolet Aveo, Alan Adler, GM’s spokesman for safety, says that the "Aveo meets or exceeds all federal motor-vehicle safety standards, which is the case for all GM vehicles."
Adler also says, "As for recalls, from time to time, things will occur that cause the need for a recall. In more than 80% of these cases, GM initiates the field action on its own and informs the appropriate governmental authorities. The safety of all GM customers is of paramount importance."
Hyundai

In response to Hyundai’s single entry on the list, the Entourage minivan, Jim Trainor, manager of product public relations at Hyundai Motor America, says that the Entourage is arguably one of the safest minivans on the road, as it’s an IIHS Top Safety Pick and gets straight five-star ratings in NHTSA tests. "Clearly, it doesn’t add up." He also calls the Entourage’s single recall "an anomaly," explaining that the brake-light wiring-harness recall affects only 790 vehicles out of the 16,260 Entourages sold in the ’07 model year. But Trainor had no comment regarding the model’s reliability, which has ranked low.
Chrysler

Shawn Morgan, Chrysler’s senior manager for Real Wheel Drive Communications, said this in response to the carmaker’s five entries on our list: "A simple counting of safety recalls does not provide a meaningful assessment of a vehicle’s performance for two reasons: One, common componentry accounts for several of the actions you have listed. For example, one recall action is a common component used on all five vehicles. You count it as five, while we count it as one. There are several other examples of this–Liberty has three recalls, with two being common, while Magnum has two recalls and both are common to other vehicles. Two, several of the recalls cited involve small numbers of vehicles; these issues were identified and addressed early through our rigorous internal monitoring processes. For example, of the two recalls for Caliber, one is less than 400 vehicles. Meaning they were identified early and fixed before significant numbers of vehicles reached the market. Early identification and action are goals of our internal monitoring processes."
She also noted that, "As for overall safety, these vehicles all meet or exceed all Federal Motor Vehicle Safety Standards. Our vehicles have performed well in a variety of internal and external test conditions, including the government’s frontal- and side-impact tests. Specifically, Nitro and Caliber received all 5-star ratings on NHTSA’s front- and side-impact crash tests. Sebring, Magnum and Liberty received the highest rating, five stars, in three out of four categories of NHTSA’s front- and side-impact tests. "
Nissan did not respond to multiple requests for comment.